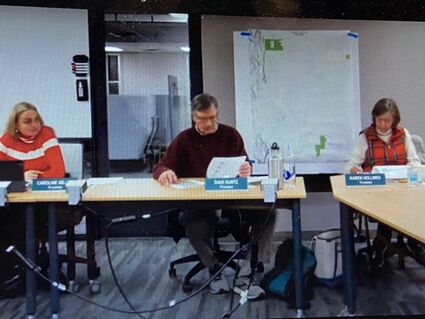 The City of Boulder Open Space Mountain Parks Board of Trustees conducted a hearing Dec. 14 to consider allowing e-bikes on some city open space. e-bikes are currently prohibited on portions of the LoBo Trail that cross City of Boulder open space. Trustees (l to r) Caroline Miller, Dave Kuntz and Karen Hollweg were in person, but all others participated online.

The City of Boulder's Open Space Mountain Parks (OSMP) Board of Trustees held a virtual hearing Dec. 14 to hear from members of the public about the city OSMP staff recommendation to change the rules about where e-bikes are allowed on city-owned open space.