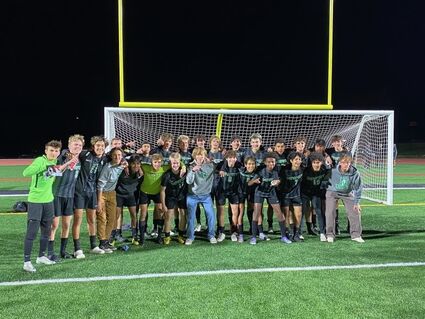 Niwot High boys soccer players celebrate after a victory over Steamboat Springs in the playoffs.

Coach Stephen Dimit's Niwot High School boys varsity soccer team took its 2022 regular season record of 12-3 into the playoffs again where they bested D'Evelyn High School by a score of 3-0 in the first round, and Steamboat Springs High School by a 3-2 margin in the second before falling to a very strong Northfield High School team 2-0 in the quarterfinals.

Despite that disappointing loss it was a great season for the Cougars as they won their conference (4A/3A Longs Peak) decisively with a record of 9-0.

The team has proven its ability to contend and make the playoffs under Coach Stephen Dimit and assistant coaches Brett Butrick and Silas Hendrich. Coach Dimit, who just concluded his seventh season at Niwot where he also teaches upper level language arts, is proud that the team notched over 700 minutes of shutout soccer during the season and had an amazing 17 different goal scorers on a team with just 20 boys.

"One of the best parts of the season," said Coach Dimit, "was opening up the new astroturf field under the lights as the later starts brought hundreds of community members out to watch and support the team."