"Noises Off!" has audience laughing 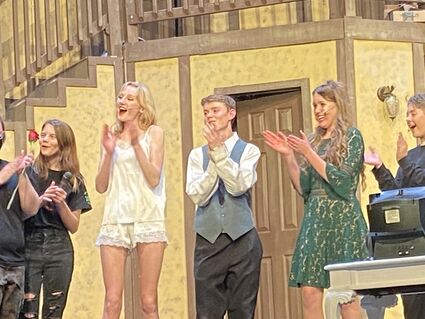 Niwot High School's production of "Noises Off!" had the audience in laughter as they tried to follow the fast-moving antics of the cast, which featured a play within a play, in three acts. Here, the actors applaud their director at the end of the last performance. The play marked the directing debut of first-year theater director Amanda Foust, who was assisted by veteran technical director Jason Watkins and assistant director Laura Walters. The cast featured two sets of actors, each of which performed two of the four shows: Hosie Adams, Ash Kissinger, Jasper Allison, Hazel Rinehart, Pali Sauer, Casey Sangelo, Rori Ann Barchers, Connor (Ace) Schuler and Grace DeRose in the "Sheets On" cast, and Maya Netel, Audrey Owen, Anna Enssle, Aiden Sagner, Audrey Asbury, and Sophie Arnett-Simon, along with Kissinger, Allison Schuler in the "Trousers Off Cast."