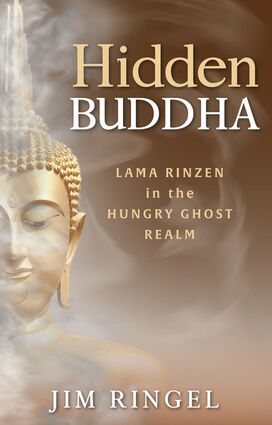 Thanks so much to Inkberry Books for this great recommendation from Jim Ringel. This is the second installment of the Lama Rinzen mystery series and Hidden Buddha: Lama Rinzen in the Hungry Ghost Realm is quite the adventure.

We start with Lama Rinzen just being reborn into a new life and a new body, this time, that of a woman who's also a locum tenens physician and on her way to the mysterious and isolated town of Alameda. It's very much one of those small towns that may not be unwelcoming to out-of-towners, but is definitely suspicious of them.

But Rinzen is equally suspicious–granted, some of that is a result of just having been reborn and lacking context for how she came to be the locum tenens at Humboldt Hospital–these people are odd. The physician in charge is heading out to Africa to study bugs as an alternative protein source. The "high tech" tablets used to track patient records never seem to sync and are empty. There is Claudia, a little girl who shouldn't be there but her mother is nowhere to be found; and to top it all off, the local energy company, O&G, seems to wield an absurd amount of power in the community.

Oh, and everyone keeps bringing up a patient that Rinzen allegedly lost in a previous life back in Poughkeepsie, and questioning if she has children or knows what it's like to be a mother.

I thought this was an interesting detail since it implies that the lama's lives aren't totally separate, that there's a possibility of continuation. Given that this is only the second book in the series, it makes sense that this detail isn't a primary focus, but it would be cool to know if this is a possibility.

What I like about this book, and its prequel, 49 Buddhas, is that in it, Ringel blends mystery with philosophy. Throughout most of the novel, the main, plot-heavy chapters are broken up with (usually) shorter chapters focused almost exclusively on either Buddhist teachings/philosophy, or a reflection of Lama Rinzen's lessons from her former teacher Daidyal.

This mix of story and a sort of side commentary makes the writing style very unique. It's also almost like the reader is given a pleasant commercial break.

There's so much going on in Humboldt–Claudia claiming she's seeing ghosts, patients acting oddly and a mysterious unconscious woman, just to name a few–that these philosophical asides almost serve as a brain break. Readers are able to ponder teachings and observations that relate to the story but are not necessarily part of it, and then it makes the reader want to get to the next major development in Rinzen's time, trying to figure out what is going on with this tiny town.

I really enjoyed the book, mostly because of the characters. Alameda's townspeople are all so quirky and interesting, especially Rosie the nurse and little Claudia. Rinzen, on the other hand, could be written off as somewhat annoying–she doesn't believe in ghosts and is borderline whiny- at times trying to figure out the lesson she's supposed to learn in order to escape the Ghost Realm–but I think that this was an interesting and smart choice on Ringel's part. It makes her relatable.

Of course we as readers (or movie-goers if ghost films are more up your alley), know the tropes and how to "properly" behave in a scary, haunting situation. But if anyone actually was trapped in a creepy hospital with weird patients during a snowstorm, I think a lot of people would probably operate much like Rinzen–a little grumpy and just wanting to get out of the situation as quickly as possible.

I also liked how complex some of the characters were. Aaron and Chico, for example, are the co-owners of O&G if you're a literary buff, you'd probably guess early on that their "good" intentions aren't so pure. Another classic bait-and-switch character was the unnamed, unconscious woman on the fifth floor. Rinzen thinks she's a reporter, but maybe she's an investor, an assassin, or a teacher. Maybe she's all of these things–Ringel really kept this story interesting by playing with the reader's expectations and challenging them, much like how Lama Rinzen's own expectations are constantly challenged throughout the book.

This is definitely something worth checking out if you're a fan of mystery and philosophy. I just think it's such a fun mix that is somewhat unexpected but certainly enjoyable. As for potential red flags, there is a discussion of murder versus suicide and a brief description of sexual assult. None of these elements are particularly graphic, but it is worth noting if you're sensitive to these topics.

Hidden Buddha is definitely a welcome read leading up to Halloween, and you can learn more from Ringel himself at the Oct. 22 book party hosted at Una Vida Meditation Center.