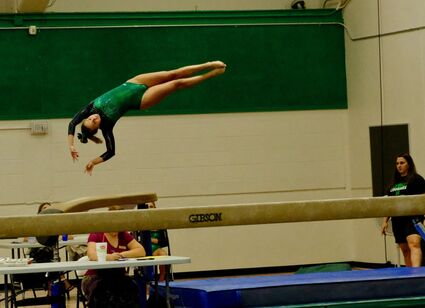 NHS gymnastics has just two seniors on the team. Senior Ava Silverstein competed in the first meet but was injured in practice and unable to participate for the past two weeks. She should be back in a few weeks, according to coach Marisa Purcell.

The team scores for Niwot High School gymnastics are trending down over the first few weeks of the season, but team chemistry is trending up, according to head coach Marisa Purcell who believes that is an important piece of her team's long-term success.

Purcell was encouraged to see her gymnasts holding hands while they supported one of their teammates on the balance beam during last week's home meet against Rocky Mountain High School, a district team from Poudre Valley.

"They were really in tune with that one girl, that one routine. They weren't worrying about themselves or who went before or who is going next," Purcell said, pleased with the positive message that that type of gesture sends. "Just a team atmosphere of their whole team is behind them."

Purcel said the idea to hold hands came from her captains, the only two seniors on the team, Nia Terrell and Ava Silverstein. That leadership is important as her young Cougars learn to think like a team in a sport that typically emphasizes individual achievement.

"That is what I look for right now is them learning how to compete as a team," Purcell said, adding that it's something they will work on all season. "They're still trying to figure it out. A couple more weeks and they'll kind of start to get it. It does take a little bit."

While the team's connection is improving after three meets, the scores are going in the other direction. The Cougars posted a score of 170.95 in their first meet against Fort Morgan, 170.00 versus Roosevelt High School, and 167.70 against the Poudre Valley District team September 7. "We had some falls on bars and beam," Purcell said. "Overall it was a tough meet for us."

"We just have to work harder and practice harder and be able to show up at those meets and perform and do what we know how to do," she said.

Niwot had a higher score than each of the three teams it faced this season but gymnastics is not about wins and losses. The average of the top three team scores during the season determines seeding at the end of the year. "We're up against ourselves the whole season trying to get a better score," Purcell said.