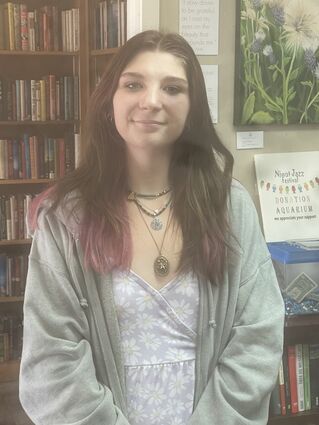 Niwot High School student Hannah Rudolph has an energetic optimism that drives her to succeed.

She is an artist, a singer, and a cheerleader. She plays guitar and she played flute for three years in middle school. She is also the only student in the history of Niwot High School who has performed in all five choirs: Chamber Singers, Evenstar, Tenor/Bass choir, Treble choir and Sedalia.

Laura Walters, the Choral Music Director at NHS, selected Rudolph as Art Student of the Week. "Hannah is a senior who has been in choir every year since freshman year," Walters said. "She is very passionate about singing. She is very dedicated to the choir program and is a great role model to other students."

Each of the five choirs requires a unique skill set. Sedalia and Treble Choir are both women's choirs. Tenor/Bass is a men's only choir, and Hannah is the only female singer. "Chamber singers and Evenstar are higher level," Rudolph explained. "You have to audition to get into those. Sedalia, Tenor/Bass and Treble are all lower-level, in the sense that Tenor/Bass and Treble Choir aren't auditioned. Sedalia is just a step down and it's not a mixed choir. I like choral pieces because of the blend in connecting with people on different levels."

Rudolph has a busy schedule. The students in the music classroom focus on learning sheet music for choir concerts, which take place every quarter, and they also learn how to sight read.

The performance schedule is different for every choir and there are events throughout the year. This year there will be a fall festival for two of the choirs in which Rudolph participates, and the school is hosting them in Niwot this year. All of the St. Vrain Valley School District high school choirs attend.

Music has always been a part of her life. "I remember singing ever since I was little," Rudolph said. "I remember one year my parents got me a tiny karaoke machine and I would use that thing relentlessly. My parents were so annoyed with me. What really got me into music, though, was my mom and my dad. They're very avid music listeners. I wanted to be up on the stage. I wanted to be that person who was bringing music to a bunch of different people."

Participation in musical theater provides a venue for fulfilling those aspirations. "You're using your body language to tell a story and also music," she said. "This year we get to pick out a song from a musical we don't completely know well, and then we give our accompanist the sheet music and we perform in front of the class. I'm excited because I'm going to be doing 'Kindergarten Boyfriend' from Heathers."

The High School will offer a musical in the spring, and the selection is currently being decided. Although the school will also be doing a musical revue in December, Rudolph will not be able to participate due to her other interests. "All the people in musical theater get the chance to pick out a solo or a duet--the seniors typically get the solos--and we have a musical revue night where parents and students can all come in and then they watch us perform our different shows. I probably am not going to be there, sadly, because we have State Cheer on those days."

Jazz has also been a big part of Rudolph's musical history. In 2021 she had the privilege of performing with Niwot's jazz band at Beau Jo's pizza for a benefit concert.

The COVID pandemic has been difficult, and like many students Rudolph feels that it has affected her mental health. "Just not being around people and not being social is always hard on me because I'm a very social person," she said.

But the choral teacher found a way to provide her students with an on-going sense of community. "At Niwot we did online choir," Rudolph explained. "Everybody would record their part and then Ms. Walters would put it in a video and then we would all sing as a choir again in a video." Walters took the individual recordings and put them together into one virtual performance. Several of the videos are available on YouTube, including the "Niwot High School Choirs present a Virtual Choir performance of Omnia Sol by Z. Randall Stroope," at https://www.youtube.com/watch?v=4ryAJ-zRg9U

"It was really awesome," Rudolph said.

Rudolph is deciding among CU Boulder, CSU, UNC or CU Denver for college. "I think I'm going to study some form of music," she said, "as a double major or an undergrad. But I do want to focus on forensics and psychology."

She got interested in that field of study through true crime podcasts. "It just always seemed interesting to me how a person could even fathom doing that to somebody and the psychology behind it." Her favorite podcast is "Serial Killers."

In terms of the music component of her education, she will probably focus on pop music, because that's where she feels comfortable, and upbeat pop and rock is what she has listened to her entire life.

One of her main goals in life is to record music. When asked if there was any advice she would like to share, Rudolph was enthusiastic. "Do music! Honestly, it's food for the soul. Take care of yourself and if you're feeling sad, listen to music or create it. It's one of the best things in my life and it's something that's helped me immensely through many obstacles and challenges."