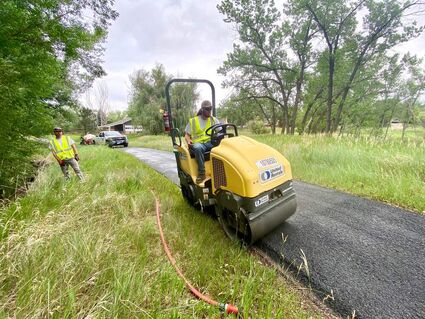 A crew of up to six people a day spent last week resurfacing a section of the LoBo Trail north of Centrebridge Drive in Niwot. Boulder County will remove equipment and wrap up the project this week.

A stretch of the LoBo Trail in Niwot is once again level and springy beneath feet and tires after Boulder County resurfaced the well-used path. Newly laid crusher fines gravel was added to the section of trail just north of Centrebridge Drive between 79th Street and the Niwot Road underpass.

"I think it's good. It's soft, it's cushy, it's nice," runner Collette Wilfong said. "I've always really liked this trail, the mix of dogs, people, bikes. I'm glad it's getting taken care of."

The trail has had patchwork fixes over the years, but a full resurface hasn't been done since the trail was built about 20 years ago, according to Boulder County Trails Field Supervisor Tristen Stone. "This doesn't get done very often," he said. "This proved to need a heavier duty fix."

Local trail users spoke up and inspired action from the county. "We've gotten a lot of complaints over the years due to puddling in bad weather," Stone said.

Now that this section of the LoBo Trail is complete, Stone said that two other trails are in line for the same treatment–Twin Lakes and the Cottontail Trail, both in Gunbarrel.