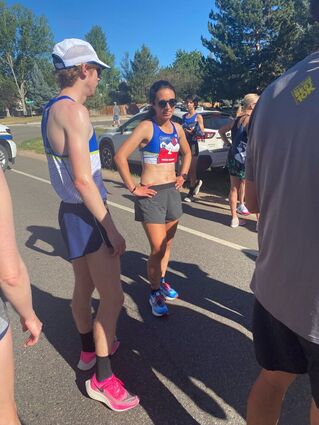 Ian and Gabi Anderson, a couple who lost their condo in the Marshall Fire on Dec. 30, competed in the Downhill Mile on the Fourth of July in Niwot. Money earned from the event is being donated to the Marshall Fire victims.

For Ian and Gabi Anderson, a couple living in Gunbarrel, running the mile—about 1,500 steps—at the second annual Downhill Mile race on the Fourth of July was a celebration of life, being in the moment, and showing their tremendous gratitude.

“We loved it!” said Ian, who along with his wife lost their Louisville home Dec. 30 in the Marshall Fire in Boulder County. “I placed 12th, and Gabi placed 49th. It was really fun. The pancake breakfast afterward was a blast.”

More than 300 runners ran the race from the Niwot High School parking lot to the Niwot Market, according to Alison Steele, who helped coordinate the event and also ran the race herself. She said proceeds of the event will be given to the Niwot Business Association, which is coordinating an effort to raise $100,000 for the Marshall Fire victims.

The Andersons are longtime runners, who ran the Downhill Mile race last year. At that time, they had recently bought their Louisville condo after renting for 5 years.

Life was good for Ian, 31, a mechanical engineer, and Gabi, 30, a civil engineer. They even ran the Boston Marathon a few months later. Running is in their blood. Natives of Ohio and college sweethearts, the couple met on the university’s cross-country team. They’ve been together ever since.

Both Ian and Gabi were home Dec. 30, 2021, when a total of 1,084 homes and buildings burned down in the Marshall Fire. It took only two hours from the time Ian noticed smoke plumes on his way to pick up food at a nearby sandwich shop to the time they evacuated.

“When I saw the smoke, I figured it was like any other fire,” he said. “I thought it was in the mountains.”

But then the smoke descended into Louisville.

“It was annoying at first because it was hard to breathe,” Gabi said. She and Ian started making calls, talking to friends and watching the news. When they noticed the Town of Superior evacuating residents, they became more concerned. Soon after, they started to collect items to be on the safe side.

When the power went out and a nearby friend decided to leave, Ian and Gabi felt it was time to go. They had not heard or received any notice to evacuate, they said. So, the couple grabbed the important documents and basic essentials they had collected and headed to their garage, where their vehicle was parked.

“We thought we would be back in a couple of hours,” Gabi said, adding they didn’t realize how close the fire was.

In the garage, Ian had to manually release the safety latch on the garage door due to the power shutting off.

“As soon as we opened the door, smoke and ash blew in like crazy,” Ian said. “We saw an aluminum can, like a soda can, on fire, getting blown around. If I’m seeing metal on fire, the fire is close, and we are in danger.”

The couple managed to find safety at a friend's house in North Boulder; however, they soon realized they wouldn’t be returning to their apartment that night. After 24 hours, they returned to their condo building. Four units in the building had caught fire, although theirs had not. Despite this, the couple could not return home because of severe smoke and water damage.

As of today, Ian said it will take two to three years for their condo to be rebuilt. In the meantime, they have to continue paying their condo mortgage while paying for their Gunbarrel rental. Thankfully, the couple is receiving assistance for their rent, Ian said.

“In the grand scheme of everyone who was affected by this, I actually feel like we are among the luckier ones, because our HOA is dealing with getting a new structure,” Ian said. “There are a lot of people who are under-insured or won’t be able to get a rebuild where they did lose their property.”

In addition to the help and support they have received from family, friends, coworkers, the town and county, the sport of running has been a big part of Ian and Gabi’s recovery from the chaos.

“Running was a coping mechanism and a distraction for me,” Ian said. “It’s something I love to do, and it gave me time to digest the situation while I was out.” It took a little more time for Gabi.

“Initially, I had a tough time getting back into running as consistently as I normally would,” she said. “I was very stressed and overwhelmed by everything that was happening. Once things became a little more stable, I was able to get back into regular training.”

Overall, the couple feels health and fitness is important to facing challenges. “Running is a metaphor for life,” Gabi said. While on a recent run, she thought about the fire and how she had to take one step at a time, and then one mile at a time. “It’s about progress, moving forward.”