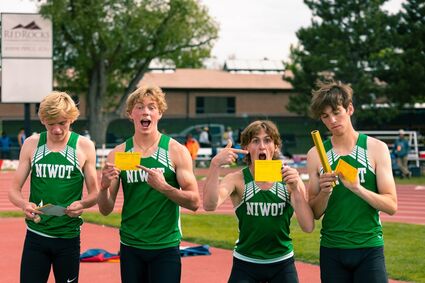 Becoming a state championship-caliber track and field athlete is a calculated process. Even as the so-called "offseason" commences during the summer, Niwot's top talent remains focused on maximizing their abilities.

Cougar head coach Maurice Henriques, fresh off leading Niwot's girls team to another state title, stays working with his athletes through his club program, REAL Training. The club includes athletes from across the state and in June alone, REAL has competed in two prominent meets: the Great Southwest Track and Field Classic in Albuquerque, New Mexico (June 2-4) and the Nike Outdoor Nationals in Eugene, Oregon (June 16-19).

Henriques said that after a few additional training sessions and local meets to conclude June, he plans on giving his runners the month of July to recover. REAL's long distance runners, mentored by Niwot T&F assistant and head cross country coach Kelly Christensen, are also planning some away time before the high school cross country season begins in August, according to Henriques.

Niwot trackster Julia Rudolph is using the summer to build on her CHSAA first team All-State (4x400-meter relay) sophomore season. Her current goal is to hit two minutes, 13 seconds in the 800-meter and 56.57 seconds in the 400.

With Niwot installing a turf football field this summer, Rudolph said REAL is training at Angevine Middle School in Lafayette a few days a week. She added that having Henriques around to coach is a definite bonus.

"He continuously helps me and my team to push each other in the workouts," Rudolph said. "He really does help us to become better people not only inside the track, but in real life."

On June 25, their schedule featured one of the aforementioned local meets, the CDm Elite Meet of Champions at Longmont's Skyline High School. Rudolph said that her plan was to run the 800m but after that event was pushed back, she tried the 200m and took a "nasty fall."

Fortunately for Rudolph, there is plenty of time to keep improving.

"I'm going to be training for the next probably month and then I'm going to take some time off and start to get back into it for cross country," Rudolph said, "and then we're going to have all of our indoor meets coming up this fall."