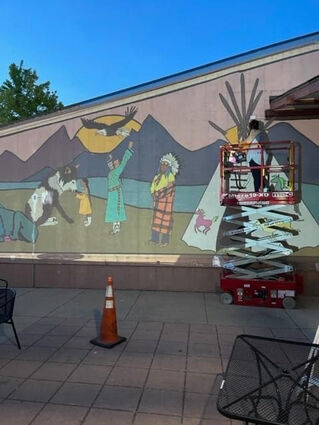 Artist Danielle SeeWalker is creating a mural on the Abo's Pizza south wall depicting Native Americans and their connection to the earth.

Niwot's historic connection to Native Americans will take on a new look with the installation of four murals in Cottonwood Square shopping center.

The Niwot Local Improvement District advisory committee recommended approval of a funding request from the owners of Cottonwood Square and the Jerry Sinor Building that provides for the LID to cover 75% of the $12,900 cost of the murals. The request was approved June 7 by LID members Eric Bergeson, Mary Coonce, Jeff Knight and Scott Firle.

The property owners will cover the balance of the cost, along with contributions of up to $500 each from the Niwot Business Association and the Niwot Cultural Arts Association. The NBA and the NCAA will be the beneficiaries of an easement that guarantees preservation of the murals for at least 10 years.

The proposal was designed to follow the LID's funding of 75% of the large mural on the former Excel Electric building at the northwest corner of Murray Street and 2nd Avenue in Niwot in 2011. That mural was also preserved with the grant of a 10-year easement to the NBA and NCAA.

The Cottonwood mural project is being coordinated through Street Wise Arts of Boulder. All of the artists are Native Americans, and the murals will reflect the experience of native peoples and their connection to the earth.

The largest mural will be located on the south wall of the Jerry Sinor Building, across the parking lot from Little Shops, Winot Niwot Coffee, and the Niwot Tavern. Artist JayCee Beyale, who met with the owners and Leah Brenner Clark in the early stages of the planning, will paint the mural. Work on the mural began on June 11.

Another large mural has been painted on the south wall of the Abo's Pizza location in Cottonwood Square by artist Danielle SeeWalker. Work on the mural began soon after approval was granted.

Two smaller murals will be located on the north walls of spaces occupied by Fly Away Home and Una Vida in the passageway across from Belle Terre.

A second funding request was submitted by the Niwot Cultural Arts Association for funding of $1,796 for the Why Not Niwot? Juried Art Show. The contest solicits artists to submit artwork featuring a connection to Niwot. Local businesses will host the art entries for the months of July and August, with patrons who visit all of the locations able to vote on a People's Choice Award.

A distinguished panel of judges, including Niwot artist Lisa Rivard, Alyson Bell of Tool Studios in Niwot, and Mary Williams of Mary Williams Fine Arts in Boulder will determine first, second and third place awards. Each of the awards carries a cash stipend for the artist, and prints of the winning juried art piece will be available for purchase, along with wine bottles displaying the art on the label and note cards featuring the winning art.

Chuck Klueber of the NBA's streetscapes committee, gave an update to the LID on the efforts to restore the tree carving by Eddie Running Wolf known as Spear Lodge Man. The carving was removed from the Niwot Sculpture Park along Niwot Road after the carving began to deteriorate significantly. Klueber reported that Niwot resident Jeff Wolcott has been storing the carving in his workshop for several months to allow it to dry out. Wolcott has also begun work on restoring the iconic tree carving.

"Eddie Running Wolf's son, Dustin, has joined the team," Klueber said. "He's a very accomplished sculptor and is guiding us in the process." Wolf will be paid $30 per hour for his work on the project, and Klueber wanted assurance that previously approved LID funding of $4,000 would be available, since the project began two years ago. LID members were supportive of the efforts, and asked Klueber to return with a better idea of the costs that will be required.

Klueber noted that Randy Cantu had created a video of the work, which will also involve recarving of some pieces which have been lost to deterioration. The Niwot Cultural Arts Association has also been involved with the project, including Sculpture Park committee member Anne Postle. The current plan is to create miniature "coffee-table size" maquettes of the tree carving to be sold to fund the restoration project as well.

Other topics of discussion included revisiting the alley regulations adopted by Boulder County as they affect the alley behind the commercial properties on 2nd Avenue between Franklin Street and Niwot Road in light of a survey showing that the alley is essentially flat. Bergeson also noted that food trucks in Niwot were a topic of discussion by the Niwot Future League and the Niwot Business Association's executive committee, and asked for clarification of any county regulations governing food trucks.