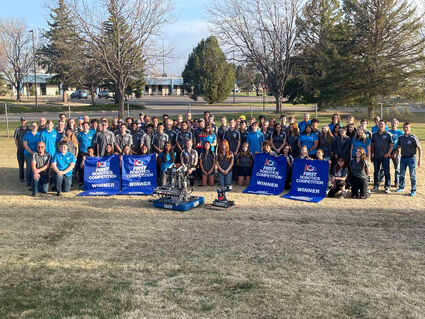 On April 23, Up-a-Creek Robotics won both the World Championship of the FIRST Robotics Competition (FRC Team 1619) and the FIRST Tech Challenge Competition (FTC Team 11260), something that has never been achieved before simultaneously by any group. "We are the best in the world," one of the coaches exclaimed at the gathering held in Longmont to honor the teams.

The World competition was held in Houston this year. FIRST is an acronym for For the Inspiration and Recognition of Science and Technology. There are over 4,600 FRC teams and 6,000 FTC teams from 26 countries worldwide.

Olga Rokhlenko, Captain of the FRC Team 1619, is thrilled that she and her team made history, especially after having to navigate through the pandemic. Rokhlenko joined the team in her freshman year at Niwot High School (NHS) and became captain in her junior year. For most of middle school, Rokhlenko had aspirations of pursuing a dancing career. It wasn't until her computer science teacher, Teresa Ewing, encouraged her to join the team, as she saw potential in Rokhlenko.

Ewing and Rokhlenko, teacher and student, work together to administer the team. Ewing recruits students and tells parents about the program, is in charge of the finances, and is an active member of the Gear Alliance. The Gear Alliance is a 501(c)(3) nonprofit committed to inspiring young people to pursue STEM careers through competitive robotics. The nonprofit oversees NHS and other high schools, and also LEGO League teams for fourth-graders and younger children. Rokhlenko works on building the layout of the robot and designates team members for specific groups on how to construct the robot.

"The game changes every year," said Ewing, referring to the robotics competition. In the beginning of January, it was announced that every team around the world had to construct a robot that could throw tennis balls. Previous competitions required teams to construct miniature airplanes, or robots that could throw frisbees. "So, this year, you got points for shooting those big tennis balls into a large funnel in the center of the field and then climbing parallel, monkey bars within two-and-a-half minutes."

Within their few months of preparation, the students spent the first week creating the layout of the robot's design, then Rokhlenko divided the 75 team members into groups: hardware design, fabrication, assembly and wiring, construction, and application development. After the 3D computer design is completed, the members construct 95% of the robot's parts at their headquarters in Longmont. Once they reached completion and tested out the robot's features, their creation went on to eventually win the World Championship.

Just a few months prior, the 13 students on the 11260 FTC Team, won the FIRST Tech Challenge Competition at the Colorado State Championship in February. This team built a robot that could pick up small objects such as cubes and small balls, and place them on a platform, while moving over and around bars.

On top of all that, this season was one of Up-A-Creek Robotics' most challenging years. "It was our first season back from COVID, and we're still navigating in a COVID world...Not to mention, we had a lot of rookies this year and people who were never in a competition before," said Rokhlenko.

The students come from different schools throughout Boulder County. The team's winning partner was from Romania. The coaches explained that after the qualifying matches, the top four teams get to pick two teams to go on to the elimination matches with. Other Niwot High students on the 11260 team included Maria Arrece, Noah Raffkin, Nichelle Gilbert, and Trevor White.

The 1619 team included freshman James O'Hara from Niwot High School. "It was really awesome," O'Hara said. He estimated that 87 students from Up-A-Creek Robotics made the trip. "There were a lot of cool robots, and a lot of cool people. I was mainly in the pit, so I worked on the robot a lot."

He explained, "Each team gets a 10 by 10 square, with all of their tools and their robot, and in between matches you can work on the robot, do anything to the robot as long as it's within the rules, and then once you're done in the pit, you go to the robot field to play a match." This was his first year with the FRC team, but he has been doing robotics through Up-A-Creek Robotics First Lego League ever since fourth grade. Eventually, he hopes to make it a career. 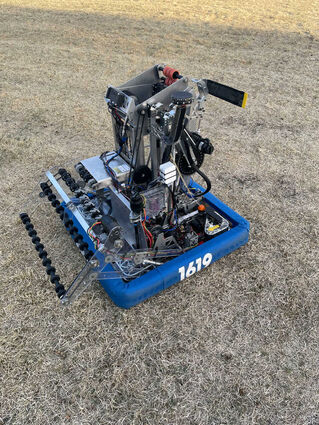 But none of this would have been made possible without the help of their sponsors: St. Vrain Valley Schools, The Toro Company, Ball Corporation, Boeing, Seagate, FIRST RF Corporation, JBJ Precision Industries, Longmont Breakfast OPTIMISTS, Adolph Coors Foundation, MCAD, Medtronic, XILINX, workday, US Engineering, Microsoft, muRata, Spectra, Kauai Labs: Build Better Robots, Markforged, Instant Imprints, and Benedict Family Foundation. These sponsors make monetary donations, as well as donations of used equipment, and also loan some of their employees to assist the students.

If you are interested in joining or having your child join, Up-A-Creek Robotics teams are composed of approximately 150 4th-12th graders primarily in the St. Vrain Valley School District. Up-A-Creek Robotics is located at 950-998 S. Sherman St., Longmont. Email them at finance@team1619.org. Registration for summer camps is now open: https://www.team1619.org/summer-camps.