Positivity lifts freshman to the top of NHS doubles 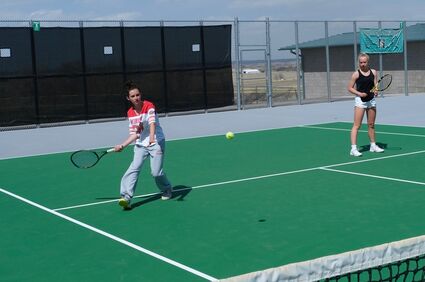 Samantha Zacky takes a ball at NHS tennis practice with fellow freshman and doubles partner Anne Haley. They became friends and partners in PE class before trying out for tennis and earning a spot as the #1 varsity doubles team.

They started by stirring things up in their physical education class at Niwot High School last fall. Freshmen Samantha Zacky and Anne Haley became partners in pickleball and every other sport they played in PE. They felt like they had a good connection and were successful as a team. But it was one particular badminton game that convinced them they had something special.

"We defeated the teache...