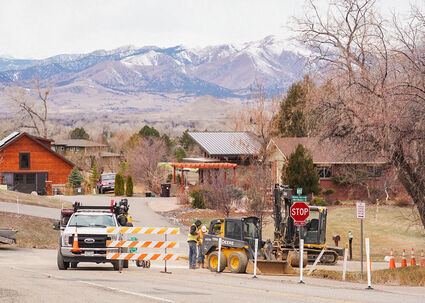 Drainage improvement work by the Left Hand Water District closed the intersection of Morton Road and Walker Avenue from March 21-23.

A road improvement project first proposed in 2017 is finally underway in Morton Heights, and, when completed later this year, will mean changes for motorists and pedestrians heading to Niwot Elementary. According to Boulder County public works engineer Dave Webster, Morton Heights Concrete and Safe Routes to School Project has been delayed by both design changes and the pandemic over the past several years, but is now on track to wrap-up this summer.

"All improvements impacting access to the elementary school must be complete by August 12," he wrote in an email interview. "Work east of the school, which may include paving of Morton Road and Paiute Avenue, drainage improvements on Paiute Avenue, and trail connections to Niwot Hills at both Morton Road and Comanche Road could go into late August or early September."

However, he continued, "This assumes there are no delays encountered during construction, but delays are not uncommon."

The first phase of the project-drainage improvements-began in December 2021, and is nearly complete, though both weather and late deliveries prolonged the closure at Walker Avenue (and the need for a temporary traffic signal on Niwot. Road). The latest closure at Morton and Walker-to lower a Left Hand Water District line that is in conflict with a future storm sewer pipe-should be the last for a few months.

"We needed to do a Phase 1 project to get the lower drainage improvements complete due to the work impacting the Boulder and White Rock Ditch," Webster said, adding that the county and its contractors have tried to schedule around school breaks to minimize traffic disruptions. "Their off-season is October to February, and they wouldn't allow us to work in their easement during the summer."

The next steps will begin in late May or early June and will bring an eight-foot-wide multi-use concrete path to Walker Avenue, a raised crosswalk connecting the Morton Road track to the main school entrance/exit point, and resurfaced trail connections into Morton Heights from the Niwot Hills trail. Portions of Morton, Walker, and Paiute will also see repaving and new landscaping.

The improvements were first proposed by the county in 2017, and two public meetings were held for residents in the impacted area. Technically, an initial step of the project was completed early on, when a "temporary" two-way asphalt track was installed on the west side of Morton Road, and then later made a permanent part of the plans. However, the project stalled when the repaving work was added, and several utility conflicts were identified during the design process, Webster said. 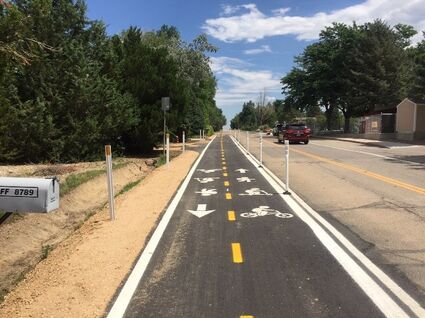 The first step in the project was the installation of a two-way asphalt track on the west side of Morton Road, across from the school.

"Coordination with the utility agencies to budget and schedule relocations was necessary and time-consuming. Adding paving was a significant design change, and added substantially to the project cost, forcing a budget decision to push the project back. Negotiations with the Boulder and White Rock Ditch Company to complete a ditch agreement were also very time-consuming."

Indeed, the project was originally scheduled to begin in 2019, with estimated costs of $450,000, but the latest tally put costs at $1.9 million, according to Webster. Funds are coming from the county's Road and Bridge capital improvement fund.

So far, the 2022 edition of the project is on staying on schedule, the early delays notwithstanding, Webster said. LHWD expects to complete its waterline work and reopen the Morton/Walker intersection on March 23. Further construction on the project will then resume on May 31.