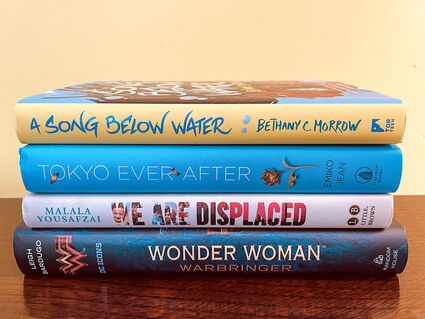 March is Women's History Month, so dive into one of these titles showcasing feminine heroism and strength.

March is Women's History Month. March is when women of all races, economic standings, religions, and sexual and gender orientations are celebrated for their hardships and victories in promoting equality and equity for all. It is hard not to be inspired by all the women who persisted under on-going threats of hate crimes and domestic terrorism. If you're interested in reading any feminist literature this month, here's a list of my personal favorites.

First up, is one of pop-culture's favorite feminist icons: Wonder Woman. Starting in 2017, DC Comics released a young-adult book series, known as the DC Icons Series. Each book was written by a bestselling author of that genre, to rewrite the origin stories of these DC superheroes (and villains) as angsty teenagers.

The first book published in the series was "Wonder Woman: Warbringer" by Leigh Bardugo. Join Princess Diana and her new gal pal on their quest to prevent World War III. Travel with them from the Amazonian island of Themyscira, to the bustling city of New York, to the ancient land where myth and reality coexist. These girls will fight toxic masculinity and learn to embrace their inner goddesses (literally) on their journey to womanhood. It's a fun adventure filled with friendship, epic fight scenes, and Greek mythology.

Up next is "A Song Below Water" by Bethany C. Morrow. These Portlandian girls don't have it easy. In this world, sirens exist, but if anyone catches them singing, they'll be legally forced to wear a silencing collar.

Meet Tavia, a teen doing her best to conceal her identity, and her sister/best friend Effie, who possesses a power that she doesn't understand - yet. Together, these sisters will embark on a journey to reveal their ancestral secrets and show the world who they truly are.

If you're looking for a book with literal Black Girl Magic, this is the one for you. But before you go in, this book does include triggering topics such as, police brutality, racial profiling, Black trauma, violence towards Black women, misogynoir, colorism, and bullying. It is at times a challenging book, but that makes it all the more worth the read. "Mem" is another good book by Morrow, if you're looking for a sci-fi novella about cloning experiments on a college campus.

Morrow's books are readily available at the Wandering Jellyfish Bookshop.

Further down the West Coast is a "California gurl" named Izumi Tanaka from "Tokyo Ever After." It's undeniable that this Cali gurl has to deal with microaggressions and racism on a daily basis. Izumi could never quite fit in with her Confederate-loving town. She wishes she knew more about her Japanese heritage; she wishes her single mom wasn't so secretive about her biological father.

Until one day, Izumi's friends discover that her dad might be the Crown Prince of Japan (spoiler alert: he is). "Tokyo Ever After" is one of my favorite books of 2021. Plus, Reese Witherspoon loves it, so you know it's good. If you're looking for a feel-good story, filled with charm, romance, tourism and culture, this is the book for you.

The final book on the list is "We Are Displaced." This is a non-fiction collection of stories of refugee girls from around the world. All of them tell stories of being forced to flee their homes due to the atrocities of war, terrorism, and/or genecoide. Some were able to obtain a green card, while others are currently residing in displacement camps. And despite all the trauma they endured, these girls persisted and never gave up on themselves or their families.

If you purchase this book, all proceeds will be used to support Malala Fund's work for girl's education.