Student-Athlete of the Week: Bryce Nemec

Series: Student-Athlete of the Week | Story 78 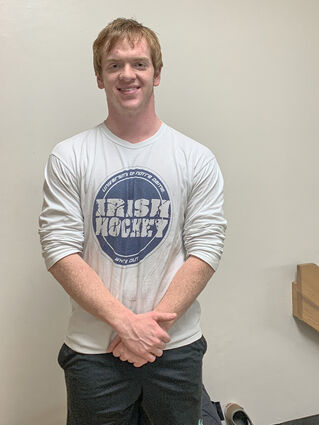 Niwot senior Bryce Nemec is seeing success so far in the 2021-22 wrestling season, after an All-state performance for the Cougar football team.

Niwot football's historic 2021 season will be remembered for many reasons, not least the dominating performance of senior Bryce Nemec, a difference-maker on both sides of the ball. Appearing in all 10 games, Nemec's bruising play as an offensive guard cleared the way for a record-setting performance by Cougar rushers, and, as a defensive lineman, helped make Niwot's defense a force to be reckoned with for the first time in many seasons. All of that added up to a 4-6 record in 2021, the Cougars' highest win total since 2008. For his part, Nemec was named second-team All State for Class 3A, a rare honor for Niwot.

Now Nemec is hoping to bring that winning energy into the Niwot wrestling season, and, so far, the early results are promising. Through seven meets, he has an 8-3 record, and, last month, he earned a trip to the podium at the highly competitive Northern Colorado Christmas Tournament, after a comeback performance that Cougars' head coach Bobby Matthews called "impressive."

"That tournament is actually tougher than the state tournament, because it's all classifications," the coach said of the two-day meet at UNC, which included 70 teams from five states. "For him to lose his first match, and come back and place is hard to do. He beat a lot of ranked kids to finish in seventh place. Would I have liked him to win the whole tournament? Sure. But I think he learned a lot more about himself coming back."

It wasn't the first hard lesson that Nemec has had to learn during his two-plus seasons of wrestling at Niwot. In fact, both his sophomore and junior seasons ended prematurely with frustrating losses, the former in the junior varsity state finals, and, most recently, in the semifinals at the 2021 Class 4A Regionals, where he was competing for a berth to the varsity state championships.

"I had a pretty big ego going into that JV state tournament," he said. "After I got beat at the JV level, I knew I had to be better at the varsity level, and that pushed me in my junior year. And then, regionals, the next year, that was basically exactly like another JV tournament, where I was so close. I knew that I was good enough to be at state, and that made me want to work a lot harder."

With both painful memories now motivating him, Nemec's first stop was the weight room, where he started turning his light-heavyweight frame into something a little more manageable. Paired with healthier eating habits, Nemec shed a total of 45 pounds over the summer, and now weighs in at around 215. That puts him in the 220-pound class as a senior, after spending last year competing against "gigantic kids" in the heavyweight class.

"I still have heavyweight tendencies-I wrestle slow-but being as small as I am, and being used to wrestling kids as big as 285, it really does help," he said. "Now I'm wrestling people who are actually my size, and I'm a lot more confident because I'm not wrestling someone 40 pounds heavier."

Nemec has his sights set on qualifying for the 2022 Class 4A state championships, and then advancing to the finals, a goal both he and Matthews believe is firmly within the realm of possibility. However, there is still a lot of wrestling left in the regular season, and the senior isn't taking his early success for granted.

"I just have to keep working hard, harder than I ever have," he said. "I definitely have things I need to work on before I'm good enough to win state, but I think it's doable."

Of course, wrestling is ultimately a team sport, and though Nemec has high individual aspirations on the mat, he also hopes to leave the team better than he found it, another formidable challenge.

"But my sophomore year was a really good year, our team was super close," he recalled of his first year on the team, which ended with two Niwot wrestlers in the state tournament. "The upperclassmen that I really looked up to really bonded with us. They were super nice to me, and I really want to keep that going."

When he's not on the gridiron or mat for Niwot, Nemec is also a member of the Niwot track team as a discus thrower. In the classroom, he is enjoying a well-earned semester of "smooth sailing," after fulfilling nearly all of his graduation requirements early.

Nemec has yet to finalize his post graduation plans, but has been in talks with the football coach at CSU-Pueblo about opportunities there for the fall of 2022. He is also pursuing opportunities in the U.S. military. Eventually, he hopes to pursue a career as a firefighter or police officer.