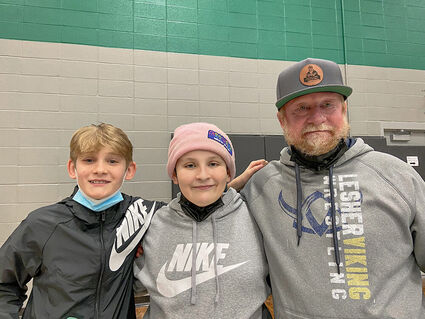 The 2022 edition of the Gary Daum Classic at Niwot High School began with the traditional welcome by NHS Wrestling Coach Bobby Matthews, who introduced Garin Daum, son of the late long-time Niwot wrestling coach for whom the wrestling tournament is named.

Matthews gave a history of Coach Daum's teaching and coaching career, noting that in addition to serving as Niwot High wrestling coach, he also coached softball and football while teaching special education students at Niwot.

Matthews first knew Daum when Matthews was coaching at Frederick High School. "He treated me like one of his own," Matthews said. "He gave me scouting reports before state on kids that he knew. We named this tournament after him after his passing."

He continued, "One of the joys of this tournament is we get a chance to see and work with his son Garin Daum, who is right here on Mat 2. Garin was a state champion for Niwot High School in 1993."

Matthews then introduced Garin Daum's grandsons, Remington Daum, a varsity wrestler at Lesher Middle School in Fort Collins, and Luca Dino of Louisville, both of whom were also assisting with running the tournament. 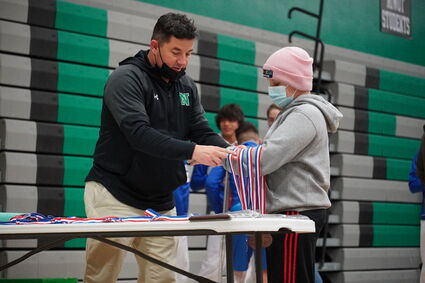 Luca and Remington took turns assisting Matthews during the awards portion of the meet.

Matthews paused, and said, "Around the school we have QR codes. Those QR Codes are links to a Go Fund Me app. During the tragedy of the fires, the Marshall Fire, [affecting] both Louisville and Superior, Gary Daum's daughter, Annica, lost her home." Matthews noted that the fund was established to help Annica Daum Dino and her family, including her son Luca, get back on their feet, and urged the crowd to consider donating if they were so inclined.

The Go Fund Me is entitled "Show Luca We Care," and at press time, had raised over $17,000 to support the family. Annica Dino, who in years past has also worked at the tournament named for her father, and her family are temporarily residing in Niwot with her mother, Crystal Daum.