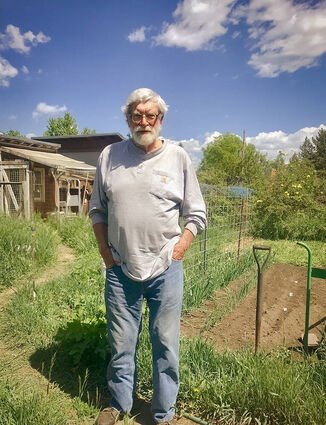 Tom's early years were divided between living at a lake in southern Wisconsin with his mother, and in Colorado with his father. These early years fostered an appreciation of nature and the outdoors that stayed with him his whole life. Tom graduated from high school in Wisconsin and went on to earn a degree from the University of Wisconsin – Madison, putting himself through college with part-time jobs, including a year's work on the Dillon, Colorado dam.

Tom married his high school sweetheart, Barbara Stewart in 1963, and in 1965 they moved to Wheatridge, Colorado, where he worked for IBM-Boulder. The pull of small-town living and elbow room resulted in Tom and Barb moving to Niwot in 1970.

A summer sabbatical spent working on a resort ranch in the Colorado Flattops made it abundantly clear to Tom that the corporate world was not right for him, so he left IBM and became a beekeeper. This profession quickly became Tom's passion, and he devoted himself to mastering the craft of keeping honeybees and producing premium raw honey through the Niwot Honey Farm, a business that he operated until recently. During the winter Tom made hand-dipped beeswax candles. In addition to keeping bees, Tom was a hunting guide in the Flattops for several years.

He served in the Niwot Volunteer Fire Department and was a founding member of the Boulder County Beekeepers' Association. Tom raised livestock such as chickens and white homing pigeons, and enjoyed gardening, and was proud that often an entire meal on the table was a product of his and Barbara's labor.

Tom had a curious and active mind, and a lifelong love of learning. He enjoyed meeting people and he was able to converse with those from all walks of life about a variety of subjects. Many of Tom's friendships have lasted several decades, and he was known for his sense of humor.

He began writing a weekly column called "Notes From the Beeyard" in the mid 1980's, first for the 'Recorder' newspapers in Niwot, Lyons and Berthoud, and then for many years for the Fence Post, a weekly agricultural publication. Tom was an educator for new beekeepers, and an advocate for honeybees and all pollinators. He actively worked to further public and political awareness of the importance of honeybees and the impact of pesticides.

A devoted father and grandfather, Tom made a point of attending any activity in which his daughter or his granddaughters were participating.

Due to failing health, Tom moved to Berthoud in the winter of 2020, living with daughter Tracy and her husband. The opportunity to spend more time with his daughter and her husband, granddaughters, and great grandsons was a source of joy for Tom, as well as for his family. This past fall Tom was able to participate in honey extraction one last time.

A celebration of Tom's rich and varied life will occur in the Spring of 2022. Memorial contributions may be made to the Tom Theobald Memorial Account, an education fund for Breckin and Hudson O'Hare in care of Tracy Theobald Briggs, and can be sent to PO Box 33, Niwot, Colorado 80544.