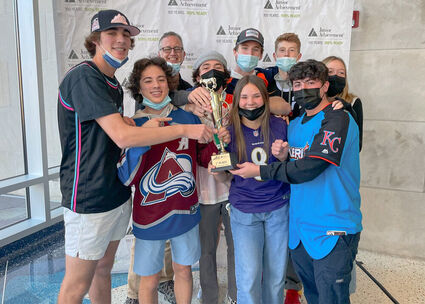 November has been a busy month for Niwot High athletics, but the playing field isn't the only place where the Cougars have been winning trophies. On Nov. 5, a team of six seniors and two juniors from Mr. Benson's AP Economics class took on 32 other Colorado high schools in the Junior Achievement Stock Market Challenge, held at the University of Denver. For 60 minutes, the aspiring wolves of Wall Street bought and sold stock in simulated transactions, trying to grow an initial $500,000 investment. When it was all said and done, the Niwot team had more than doubled its money, and was crowned the champion.

"We were in 29th place at the halfway point, and decided to come together and follow a strategy, because we had not been doing well and were pretty disorganized," senior James Johnson said. "So we pretty much just dumped a lot of our money into two companies."

Though not necessarily the best strategy for long term investing, the team's decision to focus on a limited number of tech sector stocks proved savvy, much to Mr. Benson's surprise. At first, senior team member Flynn Olden said, the team focused primarily on the real estate and energy sectors, based on previous research and their sense of the overall economy, but didn't get very far. Then, after a "hot tip" from an analyst, the group decided to move its money into the social media company "Interest," which is when things started to turn around.

"Interest ended up shooting up to $21 in one week, and that's where we got the highest return on our money," Olden continued. "Then we got suspicious of the price, and we figured it would fall. So we ended up deciding to sell everything from Interest and put it into Horizon, which was very safe and on the incline, and ended up putting us over $1 million."

The trading was limited to stocks, and there were no "real world" complications to contend with like inflation or supply-chain backlogs, and nothing like a Game Stop stock, which roiled the financial world earlier this year. But the students said the experience was exhilarating, and, for many, it boosted their interest in the world of high finance. Several, including Johnson, Olden, and senior Tyler Atkins announced plans to pursue business or finance in college, with an eye towards an investment banking or trading career.

"How hectic it was, and just the busyness really kind of mocked what a trade floor is like on Wall Street or in some other financial institution," Johnson said. "But it was pretty cool to be in that environment and be under the pressure. It still seemed like a really good opportunity to kind of get a feel for what it's really like out in the real world."

It was Benson's 15th or 16th trip to the challenge, and his first time as the winning coach. Though he typically encourages a more balanced approach to investing, he was thrilled that his students were able to make adjustments on the fly and come up with the winning strategy.