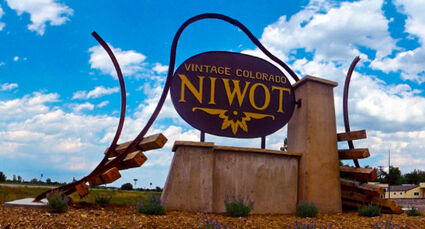 As part of the effort to update the town's five-year strategic plan, the Niwot Local Improvement District Advisory Committee invited leaders from more than a dozen local community organizations to a round table discussion at the Left Hand Grange on Nov. 2 to discuss how to prioritize tax revenues over the coming years and encourage cooperation among the groups on community projects. Among the groups represented were the Niwot Business Association, Niwot Community Association, the Rotary Club of Niwot, and the local schools.

"We, the Niwot LID, wanted to take a proactive approach in engaging and collaborating with all organizations that make Niwot, Niwot," LID chair Scott Firle said in his opening remarks. "We want to hear what your priorities are as an organization."

The discussion started off with a history of the Niwot LID, presented by former member Bruce Warren, who initially chaired the LID Advisory Committee in 2008 and served on the committee until leaving in August this year due to term limits. Formed by a vote of the Boulder Board of County Commissioners in 1993, the LID comprises the downtown and Cottonwood Square shopping districts, plus a few adjacent properties, such as Left Hand Animal Hospital.

The LID was originally empowered to collect a one-half percent sales tax to pay off a bond for street paving and other infrastructure repairs. Effective in 2008, the tax was raised to 1%, and the town was allowed to apply the additional revenues to business development and marketing. The bond was finally paid off in 2010, leaving the LID with a full 1% in sales tax revenues to allocate to new projects.

Since then, LID funds have been used for events such as Rock & Rails, but also public improvements, such as the gateway sign and the new parking lot. Warren added that 2008 is when the LID advisory committee, composed of representatives from Niwot's residential areas, community organizations and businesses, was formed to oversee spending decisions.

"Even though the LID money can only be spent to benefit the business district, the county commissioners wanted a full community participation," he said. "And so that's what they've gotten over the years with the LID Advisory Committee."

LID treasurer Bruce Rabeler then provided an overview of the district's finances, starting with revenue growth over the years. In 2008, the first year of the 1% tax, the Niwot LID collected about $55,000. In the 12 years since, that has grown to well over $200,000 per year, and could reach as high as $250,000 in 2021 if present trends continue, Rabeler said.

"I've been on the board for roughly four years and, even in those four years, we've increased the revenue about 27%."

He also noted that, as of August, the LID has collected more than $2 million total in revenues during that time. "That's a lot of events, infrastructure, maintenance, and advertising and stuff," he said.

As for spending, the LID's annual allotment for requests is set by the county at 80% of the prior year's revenues, with the remaining 20% going into a reserve. Presently, the LID's reserve balance is over $200,000.

The discussion moved to the future, and, more specifically, the Niwot five-year strategic plan. Firle noted that the last five-year plan, completed in 2016, identified infrastructure, marketing, and economic development as its primary goals, with related goals of increasing parking and enhancing connectivity of the shopping districts.

"We created the sculpture park and put in art installations, and it's beautiful," he said of the Niwot community sculpture garden at the corner of Niwot Rd. and 79th Street, a joint project of the Niwot Business Association (NBA) and Niwot Cultural Arts Association (NCAA) completed in 2019. "And it's a great walking area between 2nd Avenue and Cottonwood Square."

For the 2021 plan, Firle said the LID board has added enhanced signage to its list of objectives, as well as engaging families more, but wanted to hear from other organizations before committing to anything in particular.

"We're hoping to hear something we didn't think about," he said. "And so that's why it's important to bring everyone here to engage and collaborate and guide the future of our wonderful community."

The group heard first from Eric Bergeson, owner of Niwot Wheel Works and president of the NBA. He also serves as the NBA representative to the LID Advisory Committee. The NBA, Bergeson explained, is primarily concerned with promoting the "economic and commercial well-being of businesses" in town and, as such, it largely supports the strategic goals outlined by the LID, particularly when it comes to enhancing connectivity. "We're certainly proponents of connecting the major anchor of Niwot Market down to the center of town," he said.

Bergeson said that the NBA also plans to keep sponsoring public events throughout the year, such as Rock & Rails and the Niwot Honeybee Festival, but with the goal of making them less dependent on funding from the LID. NBA members would also like to see enhancements or improvements to existing infrastructure, such as better lighting in Cottonwood Square or better signage for upcoming events.

Bergeson also spoke on behalf of the Niwot Future League, a committee of the NBA that focuses primarily on economic development. NFL members include Warren, economic development director Catherine McHale, past NBA president Tony Santelli, and several property owners in town. This group is concerned with expanding commercial development on 2nd Avenue, and bringing new, sustainable businesses to town.

"Our role is to try to keep this district vibrant," he said. "The top priority for the NFL right now is development of any other commercial space that's possible here in Niwot, and that, of course includes this undeveloped part of 2nd Avenue, and work around the alley. We're going to look at maximizing commercial opportunities everywhere in the business district."

Up next was Dave Limbach of the Niwot Community Association, the oldest civic group in town. Limbach said that the group does not anticipate needing much LID funding in the coming years, but will continue to sponsor and support social activities, such as the 4th of July Parade, as well as community improvement projects such as the Clean Up Day.

Limbach said the NCA also plans to continue in its role as a "bidirectional conduit of information," between the town and Boulder County officials, and is currently working with county transportation to come up with a solution for paving subdivision roads, a thorny ongoing problem.

Warren was up next, this time on behalf of the NCAA, a non-profit dedicated to supporting cultural and arts initiatives in Niwot. The group was originally formed in 2009 to purchase Whistle Stop Park, but quickly grew into the town's main patron of the arts, with sponsorship of events such as Let's Wine About Winter, Why Not Niwot juried art show, First Friday art walks, and Rock & Rails, in partnership with the NBA. The NCAA also developed and maintains Niwot Children's Park. Warren said that the NCAA is always open to new ideas, and invited other organizations to enlist its support.

"One of our purposes is actually in our charter to support the other organizations in Niwot. If you have a project that you think would be a good fit, don't hesitate to come talk to us."

Warren was followed by Pat Longseth, Executive Director of Niwot Youth Sports, who announced an upcoming fundraising campaign for a permanent building in Monarch Park.

"As an organization, this is something we've really dreamt about for a long time," he said. "It really will cement Niwot Youth Sports in the area, and give us a marquee building with a real concession stand, and bathrooms that most people would love to have."

Next was Thom Lynch, past President of the Rotary Club of Niwot. He didn't outline any specific plans for RCN, but urged other groups to use their "person-power" if short of volunteers.

Lynch was followed by Nancy Pitz, principal of Niwot Elementary School. She called schools the "hub of the community," and said that building partnerships with businesses and community groups in Niwot are among her chief goals. She was followed by Jennifer Asbury from the Niwot High School Education Foundation, which raises money for academic initiatives at the school, and Donna Blondeau of the Niwot Boosters, a group that focuses on extracurricular activities such as sports, music and clubs.

Kathy Koehler, President of the Niwot Historical Society, appeared next, and said that the group plans to resume its quarterly lecture series in early 2022, and hopes to find a replacement door for the Firehouse Museum. The group is also considering a documentary about Haystack Golf Course, a longtime nearby landmark that closed in October.

She was followed by Jim Dorvee, treasurer of Left Hand Grange No. 9, one of Niwot's oldest organizations. The Grange board's primary focus, Dorvee said, is "keeping this building alive," a nonstop project that consumes nearly all the group's rental and membership revenue. As such, their primary goals are improving rental appeal, staying on top of maintenance, and trying to recruit new members.

Wrapping up the discussion were Deborah Read Fowler, who spoke about the Women's International Club of Niwot, an organization for foreign nationals living in the area, and Pat Murphy and Eve Lempriere, who introduced Niwot's newest group, an as-yet unnamed social club for residents 50 years of age and up. The inaugural meeting is set for Nov. 11.

"There's the Longmont Senior Center, which is extremely active, and has a lot of opportunities for seniors. Boulder has its own activities, and Niwot doesn't, and we have heard people asking about it," Lempriere said.

Firle concluded the meeting, thanking participants for their contributions.

"These conversations will be taken into consideration as we plan out the next five years. What I heard is that a lot of collaboration can happen between groups, between our schools, and between our volunteers...I'm looking forward to moving ahead as a community with our unique Niwot charm."