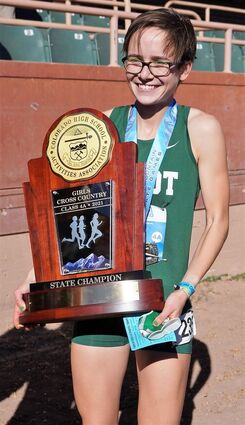 In the first win of her varsity career, senior Eva Klingbeil took first the the 2021 Class 4A cross country championships.

As predicted, the nationally-ranked Niwot girls cross country team ran away with the title after a historically dominating performance at the 2021 Class 4A state championships, held Oct. 30 at the Norris Penrose Events Center in Colorado Springs. All seven of Niwot's competitors finished in the top 16, and five of them finished in the top 10. That added up to just 20 points in the final standings, a record low across all classifications.

But almost no one predicted that unheralded Eva Klingbeil would be not just Niwot's fastest finisher on the day, but also the fastest runner in the field. After an "aggressive" push to stay with the front pack during mile two, the senior took a chance and passed teammate Mia Prok and defending champion Bethany Michalak of Air Academy in the final mile. All alone by the time she entered the chute, Klingbeil crossed the finish line with a time of 17 minutes, 58 seconds to capture the Class 4A individual title, an outcome the fourth-year varsity veteran could hardly believe herself.

"I definitely did not expect this, and it came as a surprise for me," she said. "I just wanted to put myself in a position where I would have a chance at winning, and I definitely did that. By mile two, I was still at the front end, and after that, it was just kicking in, and finishing hard. So I feel like I really executed the race how I wanted to, and it went really well."

It was Klingbeil's third appearance in the Class 4A championships, and her fastest by more than two minutes. Among those who were not surprised by the upset victory was sixth-year head coach Kelly Christensen. All season, he has been projecting the bespectacled runner as a top-3 finisher at Norris Penrose, even though she had yet to win a race during her high school career.

"Eva's talent is her ability to hurt and stick her nose where other people think it doesn't belong," he said of her inspired performance. "She's had a really consistent four years, and things fell into place this year in terms of her health and timing of her fitness. And this is a course where so much can happen that last mile that if you're a certain type of runner, and you've run it enough... she knows that after two miles, that's when it starts. You've got to be there to seize the moment."

Klingbeil's win was the biggest surprise on the day for Niwot, but it wasn't the only result that raised eyebrows. Sophomore Prok, Class 4A runner-up in 2020, was in second place with 100 yards to go, but slowed significantly and nearly collapsed before finishing. She was able to cross the line under her own power, but not before Eagle Valley senior Samantha Blair nabbed the runner-up title. Prok ended in third place (18:23.40), and was immediately taken to the medical tent. She rejoined her teammates after several minutes, but was clearly still feeling the effects of the intense race during the awards ceremony.

"It was really cool to be able to run with Eva as long as I could up there in front, but I guess I just didn't have it today as much as I wanted it," she said of her finish.

Christensen expressed concern about Prok's condition during the race and at the finish, and hopes there is a straightforward explanation.

"We'll have to go over what the last three or four days looked like for her, because she got a little light-headed," he said. "So some sort of fueling might have been off; I don't know if it was hydration or carbs or protein. But we'll sit down and make sure it wasn't just stress."

And the surprises kept coming. Prok was followed by newcomer Bella Nelson, making her first appearance at state. The freshman was fifth overall with a time of 18:35.20, a result that she admitted she was not expecting. But, again, Christensen said he wasn't surprised by Nelson's precocious performance, especially after the strong second half of her regular season.

"She had a very consistent build up on her fitness. We were really slow with her, and patient, and let every race and every workout build off it. I think that every week she got more and more confident. And there's a lot more to come because she's a very talented girl with a very talented group." 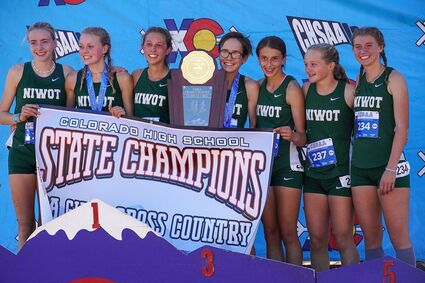 "I was super proud of all of my teammates," she said. "I came in seventh for the team, and to have them all in front of me, and all do so amazing, that's just the best feeling ever."

It will be hard for the Cougar girls to improve on the 2021 results, but with four state runners returning next year, and a hungry pool of emerging runners, it looks like the Niwot's cross country dynasty is only in its early years.

"Next year, we could have five or six number ones," Christensen said. "We'll have to figure it out as the season goes along, but I think they're all going to embrace it."

For full results and reaction videos from the Class 4A state cross country championships, visit MileSplit.com. See additional photos from the race here.