Student-Athlete of the Week: Isaac Robinson

Series: Student-Athlete of the Week | Story 68 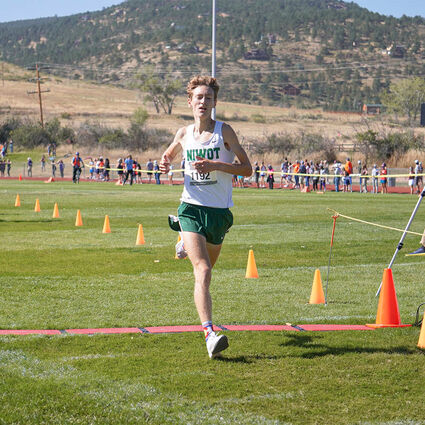 On Sept. 18, Niwot senior Isaac Robinson finished 19th overall at the challenging St. Vrain Invitational at Lyons High. It was his third top-20 finish of the 2021 season.

Niwot senior Isaac Robinson describes himself as "a little bit of a perfectionist" when it comes to academics, a tendency that has paid off with a top GPA and a selection as a 2021 National Merit semi-finalist. Now the senior is taking those perfectionist tendencies to the cross country course for Niwot, where they have been paying off with top finishes in challenging varsity races. He said that's a result of increased training and focusing on "the little things," that actually have a big impact on fitness and running.

"Sleep, and getting good nutrition, and hydration, all of that really goes a long way," he said. "There are also a lot of really good coaches at Niwot, great teammates, and it's a great environment."

Robinson opened the season on Aug. 27 at the Vista Nation Two-Mile, where he finished sixth overall with a time of 10 minutes 32 seconds. He then finished 10th in the St. Vrain RE-1J, and, most recently, he was 19th among a highly competitive field at the St. Vrain Invitational, held Sept. 18 at Lyons High. According to Niwot cross country coach Kelly Christensen, Robinson has "definitely turned the corner" in 2021, and is potentially on the cusp of a breakout senior season.

"I think it's a lot of things, but mostly consistency and hard work," the coach said. "It's learning to trust the process, and to suck it up and be tough, and run through some running pain he used to not run through. His fitness is a lot better, and he's started to believe in himself."

That pain included a case of the sniffles that hampered Robinson and some of his teammates the week before the Invitational at Lyons, making his top-20 finish there a surprise to both the senior and his coach.

"His performance was way better than he's done in the past, but it was kind of an off day for him because he was sick earlier in the week," Christensen said. "If he had felt better, he would have been in the top 10. He actually ran way better at the Mountain Vista two-mile."

Christensen added that Robinson is on track to be a part of Niwot's 2021 state team, and has potential to be a top-20 finisher there.

Running success may be a recent development for Robinson, but his academic success is not. A longtime honors student, he was part of Sunset Middle's innovative International Baccalaureate program, where he focused on design. In high school, Robinson has gravitated to Niwot's STEM-focused AP and IB courses, in preparation for a future career in the medical field. But that hasn't stopped him from enjoying non-technical classes, he said.

"I really like learning new things, so at some point, it doesn't really matter what the subject is. I like reading a lot also. And so that kind of helps me in some of those classes, too."

In fact, reading is one of Robinson's primary leisure-time hobbies, along with outdoor sports, and spending time with his family and friends.

After graduation in spring 2022, Robinson is planning to spend two years abroad as a missionary, though his ultimate destination is currently unknown. After that, he plans to enroll at BYU, where he hopes to resume competing in a sport he has come to love.

"I don't know how it's all going to work out wherever I end up, but I definitely do want to keep running, even if I'm not on a college cross country team. Because I just enjoy the sport so much, I definitely want to continue."