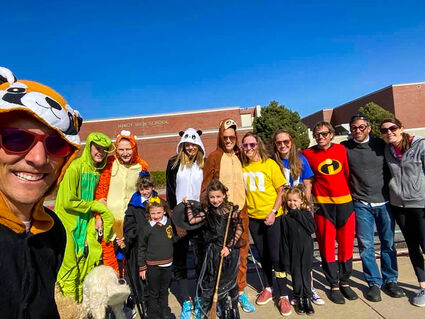 Mackenzie Demmel (third from left, Tigger costume) and friends gather for the inaugural St. Vrain for the Brain in October 2020.

As a senior in Niwot High's IB program last year, Mackenzie Demmel created St. Vrain for the Brain, a virtual 5K run/walk that raised nearly $4,000 for brain tumor research. Now the fun run is back for a second year, but this time you can get in on the action with family, friends and fellow runners on a course that starts at the high school. While that meant more work for Demmel in 2021, it's all worth it to raise more money for a cause that is near and dear to her heart, she said.

"I'm just really passionate about cancer research in general, and I want to support that in whichever way I can. So, when I had the opportunity to put on the race again, I decided to do it."

Unfortunately, Demmel's event has a very personal inspiration. In 2018, her aunt, Meg Boyer, was diagnosed with a brain tumor, and has been undergoing treatment ever since. Demmel said the race was created both as a tribute to her aunt and to a close friend of her aunt's, who also battled cancer.

"It initially started because of this person named Gabe, who my aunt really kind of looked up to. She had her own nonprofit, and she helped raise money for more rare forms of diseases. Gabe was a runner, and she did that until the point that she died. And so the initial thought behind [SVFTB] was just to acknowledge Gabe as well."

The inaugural fun run took place in October 2020, and was a mostly virtual affair, with friends and family from across the country participating. The event generated a total of $3,779 for the National Brain Tumor Society, a national non-profit organization that provides funding and support to the researchers and patients. This year, Demmel has her heights set a little higher, and hopes having an in-person component will give her a boost.

The 2021 edition of St. Vrain for the Brain kicks off at 9 a.m. on the track on Niwot High on Saturday, Sept. 18. The 3.5-mile course follows the Niwot Loop trail, and then circles back to end on the track. Running, walking, and even skipping is permitted, and costumes are highly encouraged. "There's going to be music and snacks, and just a place for people to hang out and get together, which has been kind of rare," Demmel said of the post-race festivities.

The minimum donation to enter is $20. There will be prizes for the first five finishers and one for the best costume. There will also be a virtual option, for those who can't run in person, and a Sleep in for the Cure option for late risers. For more information, visit St Vrain for the Brain 5k at Eventbrite.