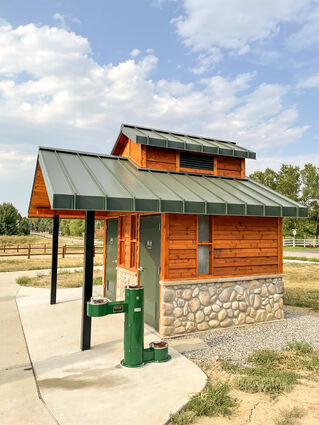 The burdensome wait to use the brand-spanking new restrooms at Left Hand Valley Grange Park is finally over. The two-stall building is officially open for your business.

Originally scheduled to be ready for public use in June, the Courier reported last month that there was a hold up because Xcel Energy needed to establish an account with the county for that unit's address before throwing the power switch to the on position.

If that had been the only reason for the delay, Brent Wheeler, Boulder County Recreation and Facilities Project Coordinator, who was responsible for overseeing the restroom installation, would have been irritated, but not to the degree of exasperation that he would shortly be facing. That's because when he checked on when the power would be connected, he was told the holdup wasn't simply because of a long queue of applications.

"I got put through the phone maze. I eventually got a hold of some local people here responsible for doing the traceable connections and they started telling me that they have no record of any line being connected to their property and there's nowhere for them to connect," Wheeler said.

But Wheeler knew that in 2017, in preparation for the restrooms at the trailhead, a power line had been run to an electrical pole and was prepped and ready to be connected. But Xcel claimed there had not been coordination with them for that power line, which posed a big problem.

After digging up correspondence that supported the line had been done to the specifications of Xcel's staff, Wheeler was advised the phone communication had not been recorded by Xcel, and therefore the procedure was not completed on their end. The conclusion by Xcel was that Boulder County would have to start with the design process, approval, permitting, and scheduling - basically step one again - costing more money and time, perhaps months.

The power line running from the site to the pole could supply power to a full flush, heated facility, which was the expectation early on. But, with the change to vault restrooms, the power that's needed is close to a meager 2 amps, just enough to power the fans that work to minimize smells from the toilets.

In July, Wheeler said, "It's rather absurd that we're being held up for this major power line when we have two small fans."

For a while Wheeler considered installing solar power in place of electricity, as is the case with many Boulder County public restrooms where there is no nearby power source. Not that that solution would have been quick or easy either, he explained.

Wheeler said because Xcel is such a large company, it took weeks of effort to get the attention of the correct people responsible for this area who would give him the answers and assistance that was needed to resolve the situation.

Issues getting the power turned on also required the county to extend the contract with Whitestone Construction twice to bring the building to the certificate of occupancy stage, meaning the building was fully functional.

Wheeler said that there may have been some confusion by Xcel Energy around what power was ultimately needed by the facility because the type of toilets and power needs were altered since the 2017 power line installation. So, meeting with Xcel representatives on site and also verifying, with the help of a county electrician, that the line was run to the pole helped to get the ball rolling in the right direction.

"I've gone through pretty much every issue I thought could happen on this project," Wheeler said referring to the early stages of the project when there was a problem with an initially selected contractor resulting in a change to the type of toilets, and there was also a year- long delay because of the need for setback approval.

But on Aug. 16, Wheeler wrote, "We got the power turned on by Xcel finally and completed our final building inspection last week. I just got back from meeting our contractor onsite to complete a few final items. Unfortunately, the restroom was trashed by people using it and going through the barrier so our cleaning crew will be hitting it first thing tomorrow morning. "

Sure enough, on Aug. 17, the orange barrier fence and cautionary signage were removed and the building was open for business.