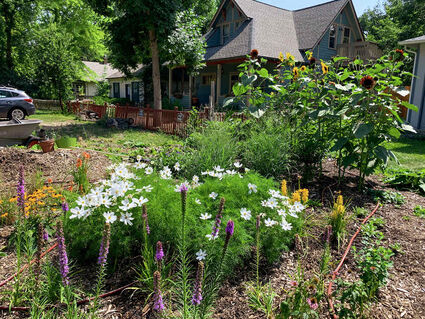 August blooms in the garden.

For Niwot resident, Cathy McCall, gardening is much more than a casual weekend hobby.

McCall, who lives on 3rd Avenue in downtown Niwot, has used her enthusiasm for gardening to not only curate her own yard into a pollinator (and wildlife) paradise, but she has also been helping her neighbors turn little corners of their property into similarly inviting oases of flowers, shrubs, and grasses.

Her latest project is a pollinator garden on the corner of 3rd Avenue and Franklin, where Niwot resident Gil Pomeroy has donated a corner of his yard for McCall's green thumb.

"It is still very much a work in progress but has been lots of fun - and hard work - involving several neighbors," McCall said.

McCall and Pomeroy, along with the help of 3rd Avenue neighbor David Snow and the hired help of Tanner Bruns, began the project at the end of last summer. The corner where McCall proposed to put in the pollinator garden was overrun by burdocks, a particularly hardy plant with spikey burrs that stick to clothes like velcro.

After the biggest burdocks had been dug out by hand, the next step was to lay down a layer of compost and mulch to help amend the soil. They then let this overwinter and began the tough work of tilling up the soil in May to get it ready for new plants.

"The fun bit is planting it up," said McCall, who noted that the ongoing work on the plot of land is a neighborly effort shared between herself, Pomeroy, and Snow, which often results in passersby stopping to ask what they are working on.

The southwest corner of Pomeroy's yard has been transformed into a colorful garden with 16 different types of plants - and more to be planted soon. Nearly all of the flowers came either from splits from McCall's own garden or from seeds or bulbs that she collected over the past year.

"These sunflowers? They came in a plastic packet attached to this shirt that my sister sent me," said McCall. McCall germinated the seeds at home before transplanting them into Pomeroy's yard. The large and showy sunflowers now stand nearly six feet tall, varying in color from bright yellow to deep burgundy.

By the middle of August, the flower garden was blooming and beautiful, a fact that McCall said she hopes inspires others to work on their own little piece of yard to create an inviting habitat for the insects, birds, and other wildlife in the neighborhood.

"Beauty is contagious," she said.

McCall, a self-professed lover of both plants and animals who holds a bachelor's degree in zoology and a Ph.D. in immunology, noted that the work she does isn't just for the sake of having a yard that gets compliments from her neighbors. At the heart of her gardening is a deeper desire to reclaim some little pieces of the natural world - a world she sees as increasingly fragmented and in decline.

"I've always been obsessed with wildlife, and what I've seen in my lifetime is that wildlife that was once abundant is now struggling," said McCall "This is my subversive way of trying to help wildlife."

McCall's series of pollinator gardens, or microhabitats, are creating a type of neighborhood "wildlife corridor" on 3rd Avenue - certainly for important pollinators like bees and butterflies, but also for all sorts of other bugs, birds, and wildlife.

In her own garden in a single afternoon, McCall recorded seeing very few honey or bumble bees, but quite a few hoverflies and wasps, as well as several large moths. Though not as popular in the public eye as butterflies and bees, these moths, hoverflies, and wasps also serve as pollinators and play other vital roles in a healthy ecosystem - serving both as food for other insects and animals, and helping to clean up decaying material.

"It is not just pollinators, cute or otherwise, that are in trouble because of human activities," said McCall. "Pollinators are the canary in the coal mine, in that we notice them. Just as important are all the millions of other not-so-cute insect species that are vital for functioning ecologies."

She noted that we can often overlook or, alternatively, try to eliminate all these other insects, arthropods, and annelids found in our gardens and yards. Ants, flies, maggots, mosquitoes, worms, wasps, beetle, grubs, and slugs - all of these creatures have some role to play in the ecology of a given area whether that is a pollinator garden, a pile of compost, or a neighborhood looking to restore pockets of natural habitat amid the urban sprawl.

This ecological awareness is something that McCall hopes her gardens and her gardening can help bring into focus for people who previously might not have stopped to think about their impacts on the local environment.

McCall pointed to a book by Douglas W. Tallamy called "Nature's Best Hope" that speaks of the importance of a grassroots approach to conservation - starting for most people in their own yards. 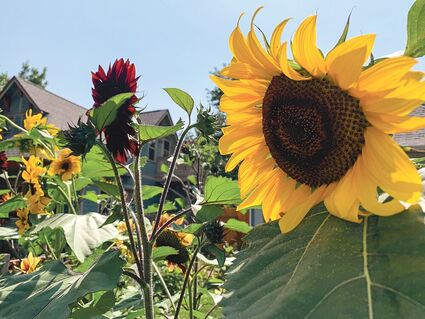 Tallamy, who notes that 83% of the land in the United States is privately owned, advocates that "[i]f conservation is to happen, it must happen largely on private property, but not just on farms and ranches; it must include all types of private property, from the smallest city lot to the largest corporate landscape."

McCall said that the actionable steps she hopes to inspire in people aren't necessarily large or radical. Little things like thinking twice before preemptively spraying for mosquitoes or other pests or simply taking out a bit of lawn in favor of planting some native shrubs alongside other exotic plants are the kinds of positive baby steps she thinks will spread.

"Mainly, my aim is to try to get people thinking about it," she said.