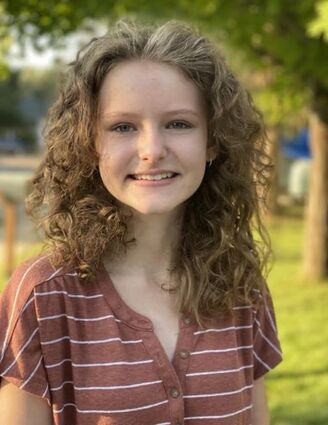 Anna Enssle is a freshman at Niwot High, but has taken on some challenges that are normally confronted by older students. In an email, Niwot choir Director Laura Walters said that Enssle is an "amazing leader," and has made choir "an incredible place this year."

"Anna Enssle is a freshman in Sedalia, one of our auditioned choirs...She is very confident learning and singing her music, has an amazingly positive attitude, and goes above and beyond wherever we need her in class. She has a lovely voice, and can sing almost any voice part, and sings whatever part we need at the time...Next year she made it into our top auditioned group, Evenstar, and I can't wait to see where music takes her!"

LHVC: As a freshman, were you nervous about auditioning for Evenstar, Sedalia, and honor choir?

AE: Yes. As an eighth grader auditioning to get into Sedalia last year, I was incredibly nervous. I had only ever been in a choir outside of school. I was nervous about potential differences in standards and expectations that an audition-only high school choir would require. Honor choir was also quite intimidating mainly because I had never participated in it, nor had I ever gotten the opportunity to audition for it. The audition process for Evenstar was nerve racking, but was also quite similar to the audition format that I used for my past audition for Sedalia, so I was less nervous when auditioning for it.

LHVC: What leadership roles/responsibilities have you taken on in choir?

AE: In choir leadership, I am one of two representatives for Sedalia. As a representative, my main responsibility is to attend the WebEx meetings every Friday, and give my input and feedback on ideas we are currently discussing. Most often, the representatives not only give feedback on existing ideas, but are also encouraged to suggest new ideas or make additions to pre-established ones. Choir leadership has been an excellent way for me to give input and build off of others in order to make choir a more inclusive, interactive, and welcoming community at Niwot.

LHVC: Are you hoping for a career in singing or performing beyond high school or college?

AE: Music and performing are my passions. I've always wanted to go into the arts and performance, both in, and after college. It would be so incredible to turn my passion for music into a career that I know I would thoroughly enjoy.