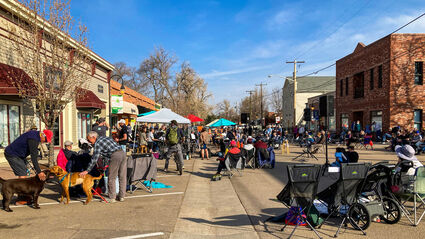 Concert attendees from as far as Westminster came to the event Saturday. One Jeffrey Honicker said, "It seemed like a pretty fun thing to do. There's people, it's outdoors, there's stuff going on, it's fun for a change."

Saturday, April 24 marked the first of five concerts hosted by The Old Oak Coffeehouse on 2nd Avenue in Niwot. According to its website the event is, in part, to celebrate that "the pandemic is beginning to show signs of ending and there is Light at the End of the Tunnel."

While Old Oak hosts a few events with different musical acts, this concert showcases the House Blend Band, made up of owner...