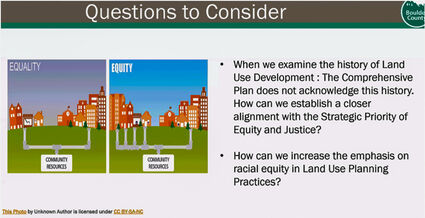 The Community Planning and Permitting department gave a presentation to the Board of County Commissioners to discuss racial equity, especially in terms of housing, transportation and general land use.

Last week, the Board of County Commissioners announced that there would be a special presentation from the Department of Community Planning and Permitting (CPP). The focus of this meeting was to discuss racial inequities associated with housing, transportation, employment and more.

The meeting, which was scheduled for Thursday, April 23, started promptly at 10 a.m. and was attended by all three commissioners and a number of representatives from CPP. Previously, the department had given a more in-depth version of this presentation to the planning commission. Notably, both Commissioners Loachamin and Levy have had experience in housing in the county with Loachamin having experience in real estate and Levy explaining that she had worked to "increase state funding for affordable housing."

The presentation was organized by first explaining some background on race and housing, including a video called ""The House We Live In." Then there was a discussion of examples of racial bias, concluding with the CPP presenters proposing possible next steps and posing questions to the commissioners.

"The solutions are complex and multilayered," said CPP director Dale Case, who began the discussion. He outlined the department's strategic priorities as:

Then, during the discussion on the film, it was explained that during the 1930s, the home assessment process was institutionalized, with race being one of the factors. This meant that white Americans were able to move to the suburbs and grow wealth through their homes. Americans of color, however, were rarely able to buy property and many had to rent instead, thus missing out on accumulating wealth.

"In Boulder County, race matters,... it's the biggest predictor of disproportionalities," said CPP planner Kathy Sandoval. Much of her presentation focused on how the land in Boulder County once belonged to a number of Indigenous communities; additionally, she gave examples of both Latino and Black history in the area.

In 1980, two young Latinos were killed by the police in Longmont, which prompted community members to found El Comité de Longmont. Additionally, in 1934 Lafayette, a public swimming pool opened, but only to white residents; when Latino residents protested, the city filled in the pool with concrete rather than try to integrate it.

Black Boulder County residents, meanwhile, were centered in "the little rectangle," an area between Canyon Boulevard., 19th Street, Gross Street and 23rd Street. There were a number of Black residents who went to the Lincoln Hills vacation area between the 1920s and 1965; however, there was hostility from the KKK.

During Code Compliance Specialist Dyan Harden's presentation, she described how mobile homes became a reality for many Americans, especially for people using the GI Bill. Additionally, at one point, Americans living in manufactured/mobile homes had higher than average incomes and educational levels. But, with zoning changes and the transition from mobile homes to single family homes, white Americans moved out of these parks while Americans of color were often unable to do so. Using 2010 data, the CPP presenters overlapped census data with maps of mobile home parks. Through this investigation, the department saw that a number of these parks have higher POC populations.

A large reason for this is due to the prioritization of highways and car transportation. According to Bond's slides, since 1956, 78% of governmental capital investment has gone toward highways, which is beneficial for car owners, but makes it more difficult for citizens who rely on public transport or other means of transportation.

She showed one slide in which the distance from a randomly selected house to a local school was just about one mile, but due to the lack of bike and pedestrian paths, the school was more than 10 minutes away if students stayed on the sidewalk, while it was only minutes away by car.

By focusing on people driving into the city for work rather than living space, cities make it more difficult for those who rely on public transport. A schematic from the Victoria Transport Policy Institute showed that the size for a small two-bedroom apartment is approximately 675 square feet while the size needed for two parking spaces (with reasonable space to park/leave) ought to be about 650 square feet.

Residents of color are affected in a number of ways due to the prioritization of cars. Bond reported that there has been an auto loan crisis, which disproportionately affects non-whites. Studies have shown that cars are one of the worst environmental offenders. A number of studies have also shown that communities of color are often the most affected by negative environmental changes.

The meeting concluded with a presentation by Planner Alberto De Los Rios discussing the need for community engagement and examples of it, which also included a brief discussion on previous legislation passed. Each of the commissioners then commented on the department's findings, with Commissioner Loachamin asking for a compiled list of the questions so that the commissioners can "dig into this [issue of race and housing further]."

For more information about the CPP, visit: https://www.bouldercounty.org/departments/land-use/

For more information about the Board of County Commissioners, visit: https://www.bouldercounty.org/government/elected-officials/commissioners/

To access the video recording of Thursday's meeting, visit: http://bouldercountyco.iqm2.com/Citizens/Detail_Meeting.aspx?ID=2151