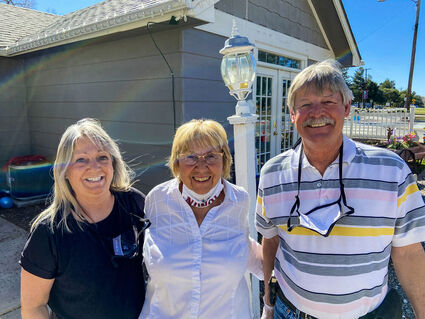 Jill Whitener (left) and Bill Whitener (right), honored with the 2020 Golden Hammer Award by Pat Murphy (center), all fully vaccinated, take a break from their duties at the Easter pancake breakfast.

Pat Murphy and Niwot Real Estate couldn't go another year without an Easter celebration. But rather than host an Easter egg hunt, as she has done for decades prior to the pandemic, Murphy sponsored a pancake breakfast at her office building at the intersection of Niwot Road and 79th Street April 3, complete with balloons, eggs and goodie bags for children.

The turnout for the free community event was steady all morning, with families enjoying the music of Eddie Spaghetti as well as the trio known as Scrap Yard Izzy. Murphy made sure that each goodie bag contained at least one dollar, and some had more. "One little boy found a two-dollar bill in his bag, and he was so excited," volunteer Karen Copperberg said.

Although the event was free, donations were collected for the family of Boulder Police Officer Eric Talley and nine other members of the community who died in the horrific shooting at the Table Mesa King Soopers. Murphy said, "Everything went well because of everyone's help. Special thanks to Bert at Niwot Market and our experienced pancake flippers and helpers. We had amazing donations totalling $2,820.25 for the victims' families."

Murphy recruited her team of volunteers to help with the event, including Ann Mills, Kathy Koehler, Kim Kalinski, Julie Breyer, Dana Breyer Saltzman, Chris Klatt, Dianne Zimmerman, Jane Langdon, and Bill and Jill Whitener. The Whiteners took a break from their duties on the serving line to accept the Golden Hammer Award, presented by Murphy to honor volunteers in Niwot. Whiteners were the 2020 recipients of the award, with the presentation delayed from last fall until the community could safely gather, masked and socially distant. 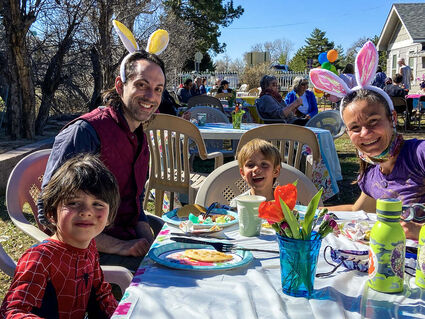 Families came out for Pat Murphy's Easter pancake breakfast, including the Kaplan family of the Meadow Lake subdivision, ( to r) Max, Dan, Leo and Rachel.

"This award was established in memory of Curtis Lizakowski," Murphy said, "who built the gazebo in Whistle Stop Park." Lizakowski died not long after completing the volunteer project for the community, and Murphy established the award in his memory to celebrate volunteers in Niwot.

Murphy noted that Jill Whitener organizes the Gargoyles for the Rock & Rails summer concert series, a group of junior high-age students who monitor the compost and recycle bins at the concerts and pick up the traffic signs at the end of the evening. She also spoke of Bill Whitener's long-time volunteer efforts, including setting up and taking down the fixtures for the concert series. "Bill and Jill helped scrape the film off of the Pinnochios windows recently, and Bill ended up with six stitches," she said.

The Golden Hammer Award plaque, which includes Murphy and others recognized in previous years, is on display at Niwot Market.