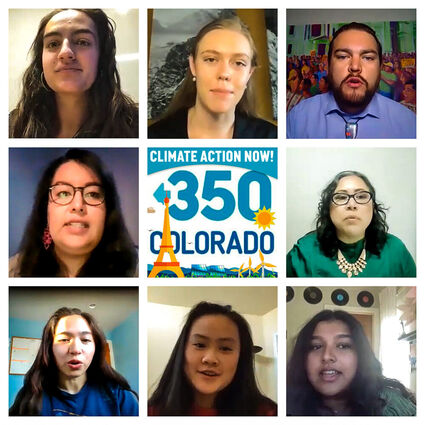 The Colorado State Legislature passed HB 19-1261 in 2019 to confront the global climate crisis. A year later, the governor's energy Office drafted a roadmap for how to confront greenhouse gas (GHG) emissions, but this roadmap has been criticized by a number of environmental organizations. Since the release of the roadmap, 60 organizations came together  to send a joint letter to the Polis administration.

The press conference was notable because of the number of groups and perspectives brought forth. These groups included 350CO, Earth Guardians and two Latino-based groups: the GreenLatinos and Colorado Latino Forum. In a press release about the press conference, a 16-year-old activist named Rakhi Kataria said, "The climate crisis is directly impacting the future of the youth, and we need to take action immediately. Colorado cannot realistically claim to be a leader in climate action while calling to expand oil and gas production. As youth, we are doing what we can to protect our future but we need to support and direct action from the AQCC and COGCC."

Per this report, the oil and gas industry is in a financial crisis and has a debt of more than $260 billion. More than 250 oil and gas producers have filed for bankruptcy since 2014. Not only is this distressing from a financial standpoint, but also because of concern that abandoned wells "leave communities with permanent toxic sites that threaten their water, air and climate for many decades into the future," according to the report.

Active as well as abandoned wells are also a concern for the present too. Patricia Garcia Nelson of Greeley is concerned because her child attends school near a controversial fracking site in the area. "There is a producing site less than 700 feet from the soccer field at my son's school," she wrote. "There have been recorded incidents of high emissions like benzene. This plan [the roadmap] is, once again, leaving some of us behind." Benzene is one of the most common chemicals released during the fracking process, and has the possibility to cause cancer, according to the CDC.

The groups hosting the press conference are asking the climate commission and other community leaders, at various levels of government, to reevaluate the governor's roadmap and what we are doing to fight climate change. More than that, the groups are "demanding that the state phase out of oil and gas production in the coming decade."