In the Footsteps of the Iron Horse 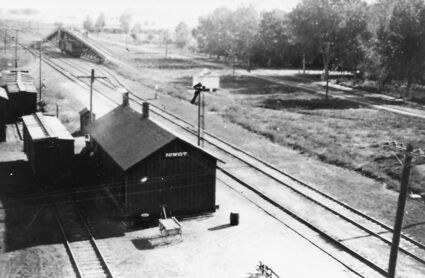 This picture of the Niwot train depot from the top of the flour mill elevator that once stood across the street on Second Avenue illustrates the importance of the railroad to commerce in Niwot. Sugar beets grown by nearby farmers were loaded in boxcars via the ramp built in 1916 in the top right portion of the photo. The crop was transported to processing factories such as the Great Western Sugar Company. Many other crops "took to the rails" regularly to be transported to areas much further away than had been possible before the railroad existed.

Railroad historian Larry Dorsey will open this year's Niwot Historical Society lectures series with a presentation highlighting the advent of the railroad and its impact on Colorado's history. The lecture is titled In the Footsteps of the Iron Horse – The Influence of the Railroad on Colorado History. The term Iron Horse refers to steam locomotives which came on the scene in the 1800s gradual...