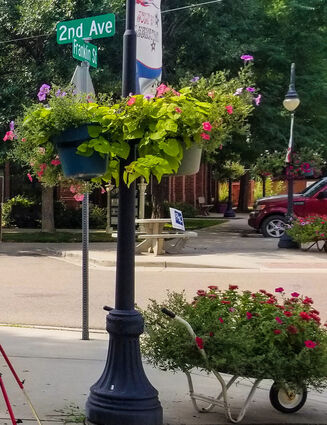 Colorful container flowers will once again grace Niwot's 2nd Avenue and Cottonwood Square after the LID board approved what chair Laura Skaggs jokingly called "an annual and perennial request."

New events headed to Niwot this spring and summer, as the Local Improvement District advisory committee approved a full slate of funding requests at its monthly meeting on March 2. The LID members also welcomed a new face to the monthly Zoom call, as Heidi Storz officially began her five-year term as a residential representative.

The LID's December 2020 revenue report has been released by the state of Colorado, and it raises a couple of "interesting" points, treasurer Bruce Rabeler reported in his monthly financial update.

"It may be there was incorrect collection of online sales tax, and possibly that's starting to be corrected," Rabeler said.

It is also likely, county liaison Mark Ruzzin pointed out, that the COVID-19 public health restrictions that closed many restaurants and reduced capacity at retailers during that period also played a role.

On the expense side, the LID approved $255,328 in funding requests in 2020, but Rabeler estimates that just $237,916 will be submitted to the county for reimbursement, with most of the outstanding expenses related to the parking lot and tree sculpture repair. With revenues of $213,335, that puts the LID expenses at $24,601 over revenues for the year, which will be covered by an allocation from the district's reserve balance, totaling just under $200,000.

Before the requests, Leigh Suskin provided the board with a review of The Little Holiday Shops of Niwot, a retail incubator project that received $5,100 in LID funding back in November 2020. She reported that 35 vendors posted nearly $40,000 in sales while the shops were open in Cottonwood Square during October, November, and December, most of it coming close to the holidays. Overall, the shops attracted 2,200 visitors, with about 25% of patrons making a purchase.

As of March 2, the collective has found a permanent home as Little Shops of Niwot elsewhere in Cottonwood Square, but the Holiday shops should be back in 2021, Suskin said.

All four of the month's funding requests were approved unanimously, starting with a two-parter from Chuck Klueber of the Niwot Business Association's Streetscapes committee. He requested $8,670 to purchase container flowers for 2nd Avenue and Cottonwood Square Shopping Center businesses, and $12,830 for their maintenance and watering through September, for a total of $21,500, the same amount as in 2020.

Appearing next was NBA Vice-President Deborah Read Fowler, a local realtor, and Kathy Trauner of Fly Away Home, who asked for $2,000 to fund expenses for "Around the World in Niwot," a one-day event with a travel theme, currently slated for May 15. Participating businesses in town will "adopt" a country for the day and celebrate it with food, drink, and decor. There will also be nine musical acts performing along with pop-up vendors. LID funds will be put towards advertising, marketing, and the musicians.

The two then presented their second request of the month: $12,450 for expenses related to six monthly sidewalk sales, from April through September. Like last summer's sales, Niwot businesses and pop-up vendors will be encouraged to set-up shop in the great outdoors for a day, to give visitors a "COVID-aware" way to shop locally. Shoppers will also be treated to live music and businesses are encouraged to offer food or beverages. Expenses include musicians, advertising, marketing, as well as supplies for participating visitors.

Before voting, members discussed the status of traditional Niwot summer events such as Rock & Rails and 4th of July, as well as more potential new events, including a late-summer pollinator festival. As of now, plans remain uncertain due to the pandemic, though Rock & Rails is likely to be back for at least a limited run.

LID chair Laura Skaggs announced that the district's strategic plan is due for its five-year update, and suggested scheduling a board retreat for later summer or early fall. She then announced that she is planning to resign from the board in 2022, a year earlier than expected, to stagger upcoming departures. Currently, terms for four members are due to end in 2023.

Skaggs then formally introduced Storz, a lawyer and longtime Niwot resident appointed by the Boulder Board of County Commissioners (BOCC) to replace Jim Eastman, whose second term ended last month. Eastman was one of the original LID Advisory Committee members appointed in 2008. Member Mary Coonce was also reappointed as one of the board's business representatives. However, the third vacancy was not filled due to a lack of eligible applicants, and current business member Biff Warren agreed to extend his term by six-months. The recruitment period for a new LID member will open again in July.

In old business, members discussed their Feb. 25 meeting with the Board of County Commissioners, and potential approaches to solving the ongoing 2nd Avenue alley issue. They also reviewed the new online funding request form and made some revisions. The form should be available to the public in the coming weeks.