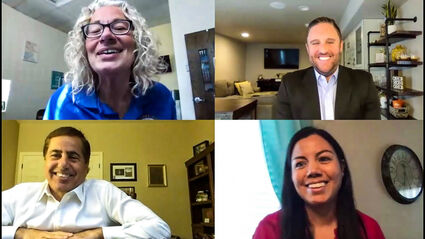 In a year full of challenges, educators have gone above and beyond to support their students. Teachers have been placed in situations they didn't ask for and had to quickly build new skills to reach learners who were often on the other side of a screen.

Nominations are due by Feb. 10. They can be made by parents, community members, students, volunteers and school or district business partners. Nomination forms can be found online at stvrainfoundation.org.

For Josh Atherton, the foundation's executive director, the nominations yield some of the best aspects of the awards program because that is where you can find story after story of excellent teaching.

He said there's the inspiring story of last year's winner, Janette Rivera Gonzales, who teaches first grade at Northridge Elementary. "She emigrated here from Mexico in her early teens. She didn't know the language at first, but ultimately graduated from Longmont High and CU before she returned to teach. A lot of her students face the same challenges she did. She's inspiring to them."

Atherton described how Gonzales supported students as the pandemic paused in-person learning last year. "She went out to each of her student's homes and stood on the sidewalk with personal signs to tell them, 'I love you and, I'm thinking about you.' She wasn't the only teacher to do that."

Ultimately, there will be one top winner and two runners up in each school. All top winners are honored with a $100 prize and are eligible to be named district-wide Teacher of the Year or a district finalist.

Megan Schlagel, last year's winner from Niwot High School, was one of four finalists for the district-wide award. Following the announcement, Niwot High School Principal Eric Rauschkolb told the Courier's editor Jocelyn Rowley that "Schlagel's ability to reach students at a 'deeply personal level' helped her stand out among other students in the district."

All schools in the system are eligible to participate. These include LaunchEd schools, charter schools, the District's Global Academy, and the District's Innovation Center.

So far, many community members have been responding to the call. According to Atherton, "Last year there were 600 nominations from teachers, a 20 percent increase over the previous year. This year, we're on track to have another 15 or 20 percent increase."

"Given what we've faced the last 10 or 11 months with COVID and the challenges of public education, our teachers are doing a lot to go above and beyond. I think the community appreciates that," Atherton said.

2021's winners will be announced at this year's Tribute to Teachers event on April 26 at 7 p.m. For the second year in a row, it will be held virtually, streamed on Facebook and YouTube.

The awards night is typically a gala where participants dress up and are able to enjoy dinner and mingle with the larger community that supports education in the district. "It's like the Academy Awards," said Atherton, "a huge celebration."

At the same time, Atherton recognized that while a virtual event will keep the awards as safe as possible, it's challenging to replicate a live gala's impact. "In the live event, you can feel the love in the room . . . the respect. Everyone's there to make the teachers feel really, really special. We're trying to bring that back through the virtual event. Our teachers deserve it."