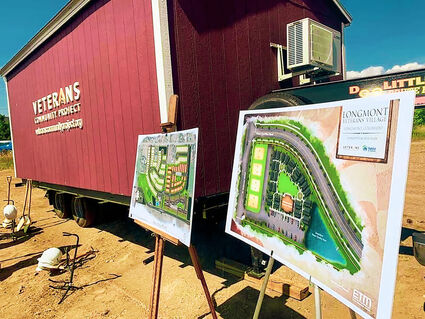 The Veterans Community Project (VCP), located near the Longmont Airport, will provide tiny homes to homeless veterans in northern Colorado.

On Aug. 27, 2020, the Veterans Community Project (VCP) broke ground on a two-acre site in Longmont, the beginning of the much-anticipated construction of a tiny home village for homeless veterans. Governor Jared Polis and Niwot resident Kevin Mulshine of HMS Development were among the speakers who oversaw the groundbreaking ceremonies.

The joint venture between VCP, the City of Longmont, and HMS Development is in the process of transforming the property into a tiny home village to serve homeless veterans in northern Colorado.

On Jan. 7, Paul Melroy, executive director of VCP Colorado, gave a virtual update hosted by Longmont Public Library, outlining how the project is going and what the nonprofit expects for 2021.

VCP Village in Longmont is located approximately half a mile west of the Longmont Home Depot on a parcel of land bounded by Nelson Airport, Rogers, and Hover. The Village will feature 26 tiny houses and a 3,000 square foot community center. Each single residency home will be 240 square feet, and the Village's five family homes, which can sleep up to seven, will be 340 square feet.

The VCP Village will be part of a larger 65-acre housing development called Mountain Brook, which will feature single-family homes, townhomes, and condos ranging in price from $350,000 to $900,000.

According to Melroy, VCP has secured sponsorships for 25 of the 26 tiny homes and is still working on completing funding for the community center, which will have a kitchen, fellowship hall and offices for staff. What is roughly a 5 million dollar project is expected to provide about $1 million worth of services to the area each year. The VCP, a registered 501(3)(c) nonprofit, is privately funded and depends primarily on donations and philanthropy.

VCP's mission is to serve any veteran who has taken the oath with the goal of ending veteran homelessness everywhere. Often this means working with veterans with untreated or undiagnosed PTSD. Their staff also works with veterans who have dishonorable discharges and might not qualify for financial assistance through the VA or other federal sources.

In 2019, Melroy said it was estimated that there were about 10,000 homeless people in Colorado, and generally, in any homeless population about 20 to 25% of those people are veterans.

In his presentation, Melroy also shared some sobering statistics about homeless veterans, noting that 1.5 million veterans live in poverty and 40% of homeless vets live in places not suitable for human habitation.

VCP's solution is not just a tiny home village that provides transitional housing to homeless veterans, helping them save money and learn life skills before moving to a more permanent residence. The majority of their work is providing case management for residents as well as outreach services for comprehensive support to get homeless vets back on their feet.

"The tiny houses are the shiny objects, but the bulk of the day-to-day work is providing support to any vets in need," said Melroy.

In Kansas City, where the first VCP village was established in 2018, the village operates with a 10:1 ratio of veterans to case managers, and Melroy expects about the same ratio in Longmont with three full-time case managers as well as a property manager.

Melroy said northern Colorado has one particular challenge that Kansas City doesn't have, which is transportation. As the VCP Longmont's outreach team works to reach homeless veterans, they are finding the population is dispersed in a wider geographic area. Right now they are focused on Boulder, Weld, and Larimer counties but are starting to pick up some cases in Adams County and are also working with the VA in Cheyenne.

"We're discovering pockets of veterans in Greeley, Fort Collins, and then also some pretty rural areas. We're focused on getting out to them and taking service to them. That's going to be a big part of what we do here in northern Colorado," said Melroy.

The VCP Longmont operation does not yet have an outreach center set up. Melroy is in conversation with the City of Longmont about taking over a city-owned space in downtown and hopes to have a physical location set up in the next couple of weeks.

Melroy said that his team members are currently providing mobile services, working out of their cars and homes, and have been for all of 2020. They have housed about a dozen vets already this year. Last year they provided $16,000 in emergency financial assistance and expect to provide more this year.

"We are worried about what will ultimately be a wave of foreclosures and evictions. Some of that has been forestalled, but we're already seeing the numbers go up. We also expect there to be a really high demand for emergency financial assistance," said Melroy.

Melroy stressed that the VCP relies heavily on community partners to provide all the necessary services for the veterans. Currently, they are partnering with Bridge House, Hope, Mental Health Partners, Qualified Listeners, and other Longmont organizations.

Melroy said the eagerness of the Longmont city manager and city council to take on the challenge of homelessness along with the partnership with HMS Development was one of the reasons the VCP chose Longmont over other possible cities. Longmont is the first expansion city since the initial tiny home village in Kansas City and will be one of eight new locations VCP is working to complete by 2022. 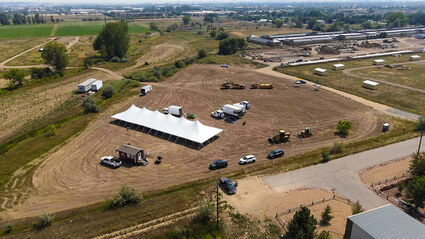 An aerial view of the future site of The Village, a housing development for homeless veterans being built in Longmont as part of the Veterans Community Project.

Looking to the future, VCP hopes to begin construction of the tiny homes in the spring of 2021 with the goal of laying foundations in April. Currently, work is being done on the land to set up sewer and utilities. These property improvements are a donation from HMS Development.

Once construction begins on the tiny homes, VCP will be looking for a few hundred volunteers to help with the project. Melroy said about 70% of the labor of building the tiny homes is volunteer-based, similar to Habitat for Humanity.

And as both the tiny home village and the Mountain Brook development are completed in the coming months, the hope is that residents and the broader community will view the VCP Village in Longmont as an amenity and an opportunity to connect with the veteran community.

"This is a little bit of a grand experiment, and we're pretty excited about that," said Melroy.

For more information on the VCP Village - Longmont or to find our how to volunteer, visit http://www.vcp.org.