Student-Athlete of the Week: Charlie Herring

Series: Student-Athlete of the Week | Story 43 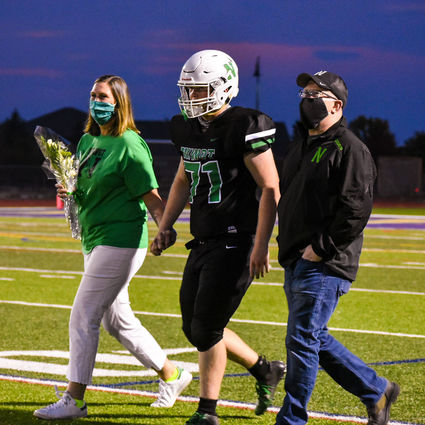 Herring and his fellow football seniors were honored in a modified version of Senior Night before their game against Holy Family, on Oct.9.

For Niwot first-year coach Nikolas Blume, the 2020 football season will be memorable for many things, and not all of them pleasant. But one pleasant memory he will have is of senior Charlie Herring, a newcomer like himself, whose "work ethic and dedication to his teammates," helped the coach nudge the program in a promising direction.

"Charlie was a first year starter and a great leader for us this season," Blume wrote in an email interview. "You won't find a young man more dedicated to bettering his friends. He has a contagious sense of humor and helped keep practice fun during these strange times. Along with our other seniors, we appreciate how he took the late season start in stride, never complained and set a positive example for all of our younger players."

Indeed, the younger players outnumbered the Niwot seniors in 2020 by a hefty margin this year, which made Herring stand out more than his newcomer status did. For his part, Herring enjoyed the "camaraderie and brotherhood" of the developing team, and especially his unsung role as an offensive lineman, where he protected quarterback and fellow senior Ayden Bartko.

"It was fun," Herring said of playing an unglamorous position. "I got to block and push people out of the way."

Unfortunately, there wasn't much else fun about the Cougars' 1-6 season, and Niwot suffered some painful losses on the way to their only victory, against Thornton in the final week. But the win was important to Herring and the dozen other seniors who stuck with the team, so the 2020 season wasn't a total loss, in his estimation.

"It was actually a really big deal," Herring said of Niwot's stirring 26-20 comeback win over the Trojans on Nov. 20. "We hadn't won any other games that season, and, for our seniors, we went out with a legacy, and for everyone else, that sets a path."

If the football season had its ups and downs for Herring, so has the 2020-21 school year so far. Due to COVID-19 restrictions, Herring started his senior year of high school remotely, only to move to the part-time, hybrid model six weeks later. Now St. Vrain schools are back to the remote model, as COVID-19 cases have risen to record levels across Colorado and Boulder County. Along the way, Herring and other 12th graders missed out on traditional fall events such as homecoming and spirit assemblies.

"There are parts of it where it feels harder than junior year, and parts feel like it's a breeze," he said. "The online stuff is not really my thing. I learn a lot better in person."

As right tackle, Herring (71) enjoyed pushing people down in the service of fellow senior Ayden Bartko and the Niwot offense.

That said, Herring does enjoy his creative writing classes with Mrs. Roberts, whom he also had as a junior. He also enjoys his automotive classes at the Career Development Center and the "hands on" work he gets to do.

Herring's love of cars doesn't stop there. In fact, he considers himself a "car guy" and has been known to spend his free time in the garage. When asked about his dream car and his classic dream car, Herring didn't have to think too long.

Herring is hoping to make a career out of his passion. After graduation, he plans to study at Broomfield's Spartan College of Aeronautics and Technology in preparation for a career as an automotive or aeronautical mechanic.

When he's not under the hood or on the field for Niwot, Herring enjoys fishing and spending time with friends and family, including sisters Lily and Olivia.