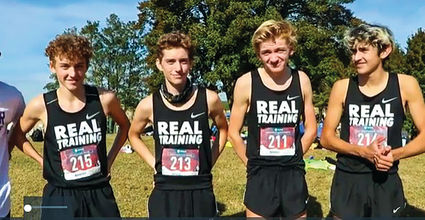 Grayden Rauba, Curtis Volf, Zane Bergen, and Joaquin Herrera wait to be interviewed after competing in the 2020 RunningLane National Cross Country Championships on Nov. 21. The Cougars earned a runner-up title and set the third fastest high school team average in history. (Joey Hendershot is not pictured.)

The Niwot cross country teams dominated their Colorado competition during the 2020 season, so they decided to take their act on the road. On Nov. 21, members of the varsity squad traveled to Huntsville, Alabama to compete in the 2020 RunningLane National Cross Country Championships and prove they can dominate non-Colorado competition just as easily.

"We wouldn't have expected them to run as fast as they did," Niwot cross country coach Kelly Christensen said of the boys' historic performance. "But the course was fast, and if they learned anything, it was about the way they competed."

"For them to all run that fast really stands out," Christensen said. "Not just one person, but all of them-Zane, Grady, Curtis, Joey, and Joaquin-just to have those five guys run as fast as they did is pretty special."

While that would seem a difficult accomplishment to top, the Cougars had the misfortune of competing against American Fork, Utah, one of the most storied distance programs in the country. Hoping to redeem a second place finish at the Utah State Championships, the Cavemen not only the edged out Niwot for the team title, but ended up posting the fastest average ever of 15:00.99, beating a 42-year old mark (15:01.02) set by South Eugene, Ore. in 1978.

"Going down in altitude always helps," Christensen said of the course conditions and the record-setting times. "The grass was short and dead, not spongy and soft, so it was easy to run on, like running on a track surface. It was about the width of a track the entire race, too, and I think that was the biggest reason for why so many guys ran well. You could just open up your stride and run anywhere on the course without bumping or jostling." 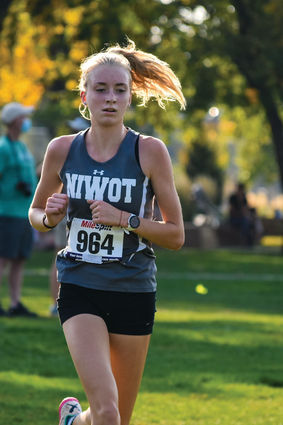 Of course, Niwot has some pretty special runners on the girls side, too, and they were also able to take advantage of the speedy course conditions. Unfortunately, just three of them were available for the trip, so the Cougar girls didn't register a team score. That didn't matter much to Christensen, though, as the three who did compete-freshman Mia Prok, senior Lucca Fulkerson, and sophomore Maddie Shults-were impressive enough to make a statement.

"We could have added any two of 15 girls on our team, and we would have won," he said. "Madison obviously took a minute off of her PR. We knew it was just a matter of until she figured it out and left it all out on the course. And Lucca was having the race of her life, and was going to run a sub-17 with Mia, but got wobbly legs with 40 meters to go, and collapsed four times."

But Fulkerson still managed to finish the race in a personal best time of 17:16.44, which was good for fifth overall, just ahead of Shults in sixth (17:16.46). Prok finished second overall with a time of 16:56.97, the fastest freshman time of the year.