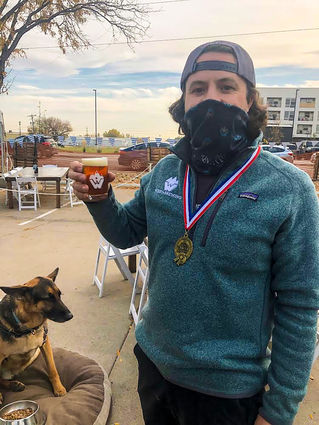 The craft beer business hasn't been immune to 2020. Even the Great American Beer Festival (GABF) was forced to evolve into a virtual version of itself, with the event's highly regarded awards program, now in its 34th year, revealing winners online.

Among all of the changes at GABF, one Boulder County brewery with Gunbarrel roots stood tall. Wibby Brewing beat out 110 other entries in the American amber lager category to win a gold medal for its Volksbier Vienna Lager.

A slightly crisp but malty lager with 5.5% alcohol by volume, the winning beer shone as bright with a beautiful color, dry finish, and a creamy head. It was made by the brewery's founder and brewmaster Ryan Wibby, who grew up in Gunbarrel, went to Fairview High School and spent Friday nights attending football games.

"This year's medal is different for me," said Wibby. "It was our first gold, which is amazing. It also brings me back to 2017 when we won our silver for Moondoor Dunkel. At that win, I proposed to my now wife."

Wibby's parents, who still live in Gunbarrel, are thrilled for him. "Both myself and Ryan's mother couldn't be prouder of what Ryan, his wife, his partners, and the crew at Wibby Brewing have made since they opened five years ago," Chuck Wibby said. "It's the culmination of all the hard work they've put into the brewery, especially given the difficult environment with Covid this year."

Always a GABF highlight, this year's awards night was different than anything in the festival's history. Instead of beer makers assembling at the Colorado Convention Center with their teams and a beer, some breweries had taproom watch parties. Wibby said that his taproom party drew about 30 people, mostly staff.

Furthermore, instead of receiving medals on stage with a handshake from craft beer icon and GABF Founder Charlie Papazian, this year's winners found different ways to celebrate.

Wibby had headed home to see the results and to spend time with his wife. The couple was marking five years to the day that he'd met his wife, and they had plans. "When I got home, my wife ran to me screaming and my phone was blowing up," he shared.

Other stats tell a fuller story about how this year's GABF is different. This year's awards saw around 600 fewer entries than last year's competition. According to a press release distributed by the Brewer's Association, 2020 judges evaluated the beer through 35 sessions over a period of 18 days and in full protective gear.

A remote awards presentation also meant that this year's winners had to forego a key GABF experience: receiving their medal immediately and then attending the final tasting session after the awards. 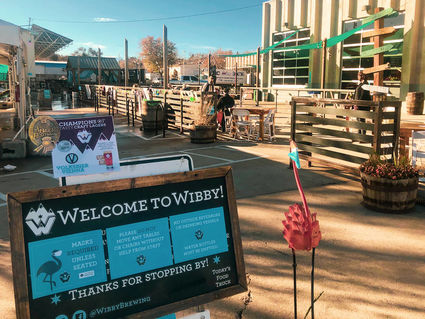 In years past, the final session has been a chance for drinkers to taste freshly awarded beer and for brewers to walk the convention center floor, receiving handshakes and accolades. This year, those moments just couldn't happen. Wibby received his medal the following week and said that he didn't take it off for days.

As it turns out, there's one GABF experience that can be replicated: the chance for breweries to promote their winning beer to customers who want experience winning beers in their own glass. As of last week, the Volksbier was still on tap, available at the taproom to drink on-premise or take off-premise in pints and 32 or 64 oz. growlers. Soon it will also be available in cans.

For those who want a low-contact approach to getting the beer, it's possible to order and pay for it on Wibby's website, then pick it up at the taproom. If they'd like to sit and enjoy it in the taproom, Wibby is currently using the lowest-contact method possible to serve guests.