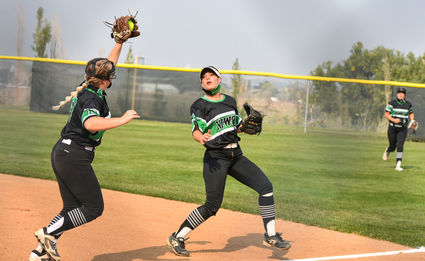 Hannah Basset catches a short pop-up near first base while teammate Zoe Choicej looks on during Niwot's loss to Berthoud on Sept. 18.

Back in mid-August, Niwot softball opened its season against Berthoud. It was not a competitive affair and the Cougars lost 15-0 in three innings. On Friday, Sept. 18, the two teams reconvened, this time in Niwot. Although Niwot lost again, 9-7, the team was hardly recognizable from a month ago.

Niwot was without its freshman pitcher Anne Booth and junior shortstop Ayva McComas for the first meeting and their presence proved large in the rematch. Booth has been a workhorse all year for Niwot, pitching in 57.2 of Niwot's 71 total innings. She kept the game close throughout, allowing seven earned runs and striking out five.

It was, however, a rough start for Booth. Berthoud connected with three consecutive extra-base hits to open the game and took a 3-0 lead before Niwot could blink. Shades of their last meeting resurfaced but Booth locked in and retired the side with no more damage.

Niwot answered with a run in the first, two in the third and one in the fourth. Head coach Bobby Matthews was a maestro at manufacturing runs as three of those four were aided by a sacrifice bunt. Niwot's two, four and eight-hole hitters each dropped a bunt, a testament to their selfless play.

"It's something we've been working on," Matthews said. "I think with our youth and putting the ball in play is always a good thing. When you put the ball in play, you give yourself a chance. So that's kind of what we're trying to do is just put the ball in play and move runners. If we get out, we want it to be a constructive out where a runner advances."

In the fifth inning, Berthoud took a 6-4 lead on an opposite-field triple and hope was dwindling late for the Cougars. Senior catcher Dulce Amaya led off Niwot's portion of the fifth inning with a walk and McComas put an end to the small ball and cranked a game-tying two-run home run.

Expectations have been lofty for McComas after hitting for a .527 average last year. Her .419 mark heading into Friday led Matthews to wonder when she'd take off. "(I'm) kind of waiting for her to break out and that's her second home run in the last three games so hopefully, she continues doing that," Matthews said.

Unfortunately for Niwot, its lead was short-lived. Berthoud's nine-hole hitter blasted a go-ahead homer in the sixth and the Spartans took the lead once again. Berthoud would tag on two more runs in the inning and Niwot was unable to answer in the bottom half. 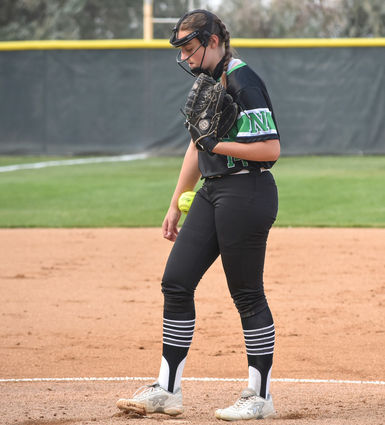 Freshman pitcher Anne Booth takes a minute to compose herself after getting roughed up in the first inning of Niwot's narrow loss to Berthoud on Sept. 18.

Down 9-6 heading into the final inning, Amaya led off with a single and later scored. The drama peaked with Niwot loading the bases but the Cougars were unable to push across the tying run. Matthews was proud of how his players fought and gave themselves a chance to win in the last frame.

"If you can get the winning run on in the last inning, when you're down, that's a positive," Matthews said. "We were one hit away from tying it, another hit from winning it and really one swing from winning it. As a coach, with the youth and inexperience, I can't ask for anything better."

Niwot has had a strong history of playing close games in 2020 with a 4-3 record in games decided by two runs or less.

Matthews' Cougars dropped to 5-7 on the year and will match up against Severance on Sept. 22 and Frederick on Sept. 24.