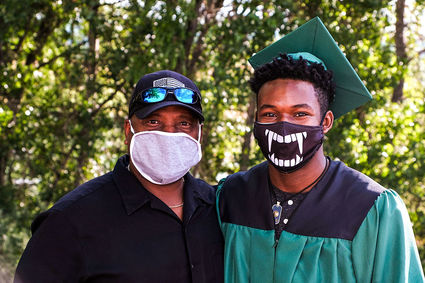 Next stop, Parkville, Missouri. Basketball star Kyle Reeves was among the 250 graduates at Niwot's belated commencement ceremony on July 25.

Kyle Reeves isn't quite sure how his recruiting videos ended up in the hands of the Park University men's basketball Coach Jason Kline, he's just glad they did. When the spread of coronavirus made recruiting a secondary concern for many college athletic programs across the country, the 6-foot, 4-inch Reeves thought the opportunities he fought so hard to earn on the court as a point guard for Niwot might be put on hold for another year.

"Someone sent him my films, and he saw them and liked me, so he found my number, shot me a text, and the rest is history," Reeves said. The recent graduate was also considering programs at Otero Junior College in La Junta and Humboldt State in California. "No one else was really reaching out. Park reached out further than any other school, at much more of a consistent rate, so I took my opportunity with Park and stuck with them."

It's an opportunity Reeves is determined to make the most of. In 2019-20, the Pirates finished the regular season with a 21-6 record, which was good for their first conference championship since 1998. When the season was cut short by the pandemic in March, they were waiting on a selection bid to the NAIA postseason tournament. Kline, now in his 17th year at the helm, was later honored as the American Midwest Conference Coach of the Year, and Reeves said he is looking forward to learning his system.

"I feel like I can become a much better player, playing for an experienced coach and someone who is passionate about their sport."

On his end of the equation, Reeves is coming off a solid year with the Cougars, which qualified for the Class 4A postseason for the first time since 2017, thanks in no small part to Reeves' efforts. He was Niwot's third leading scorer, with 186 points, and led the team in blocks and steals. However, most of his growth in the 2019-20 season didn't necessarily show up in his stat line.

"Last season was definitely good preparation for the next level," he said. "It taught me a lot more mentally than physically, because it taught me to deal with complex problems and fix them."

Niwot head coach Clayton Wittrock echoed those sentiments about Reeves' season, and is thrilled the point guard is getting a chance to continue his journey.

"Kyle is a fierce competitor, and as long as he works as hard as he is capable of, he will be successful," Wittrock said. "After our season ended, he and I met and talked about different opportunities out there. When things got a bit crazy I was concerned about Kyle's options, so I am thankful for how things worked out. He has made a great choice and is joining a great program."

Though basketball was the main attraction to Park, Reeves is also looking forward to forging a unique path in the world, and Park University, located north of Kansas City (MO), fit the bill perfectly. He hasn't had a chance to visit the campus in person yet, but liked what he saw during his virtual tour. As of now, Reeves is planning to major in computer science, but also plans to study botany and horticulture, passions he developed as a child helping his grandmother tend to her plants and garden. He eventually plans to make his career in that field, after a successful stint in the NBA.

"It was different," Reeves said of his decision to enroll at Park. "For some reason I feel a strong connection to that school. It's an environment that I'm not really familiar with, so it gives me decent exposure to a lot of things."

"If you can't beat them, join them, but I'll still root for the Broncos if there isn't anyone else around."