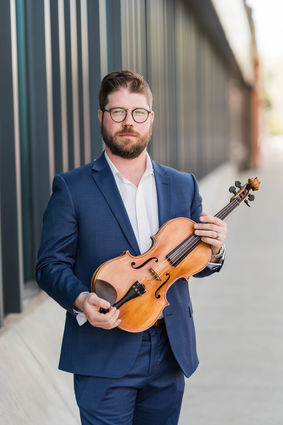 Longmont resident Andrew Krimm was recently appointed as the new executive director for the Boulder Symphony.

"Andrew brings the rare combination of business execution management experience and is an accomplished musician who has performed at the highest level," Boulder Symphony board chair Tony Santelli said in a recent press release. "In these unpredictable times, we need a captain who will help guide Boulder Symphony to the next level of artistic excellence and community engagement." Santelli, former principal owner of Niwot Tavern, has been involved on the board of the Boulder Symphony since June 2010.

Krimm comes to the Boulder Symphony from the Boulder-based Altius Quartet, where he toured as a violist and was also the group's business manager for the past nine years. For the past two years, he also served as the executive director for the Western Slope Concert Series in Grand Junction.

"One of the things, when I was working with Altius, was that I actually really enjoyed the business aspect - creating and promoting a brand," Krimm said. "So I decided to take a step back from traveling so much as a touring musician and focus more on creating music and art in my own community."

As executive director, part of his work includes finding ways to make the Boulder Symphony's music more accessible to a wider audience. And, as with most classical arts programs, he will lead the charge to try to reach a younger and more diverse audience.

"Classical music has this image of being really uptight and only the elite of the elite can appreciate it," he said. "My entire career I've always thought that's not accurate at all. If it's presented in the right way, using stories or explaining all the weird sounds you're going to be hearing, then people are more open to it and like it."

Krimm believes you don't have to act a certain way or be a certain type of person to enjoy classical music, and he sees working to remove stereotypes and barriers as part of his role as executive director.

Part of his focus will be on finding ways to showcase lesser known and more diverse composers in addition to reaching a more diverse audience. His aim is to see more community participation regardless of age, race, or socio-economic background.

"The board, Devin Patrick Hughes [Boulder Symphony Music Director and Conductor], and I have been working diligently on a way to be even more inclusive of underrepresented composers and artists, creating programs to help educate underrepresented musicians and provide scholarships for them. We have a really large education and outreach program that we use to reach different types of people who may not even know that we exist," Krimm said.

In normal years, the Boulder Symphony offers some unique programming such as its family-friendly Curiosity Concerts and their dementia and sensory-friendly GLOW Project concert series.

In the time of COVID-19, the Boulder Symphony has canceled all regular programming and moved to a virtual format with its new Virtual Virtuoso performances. Ten to twelve free virtual performances are planned between now and November. "Our goal is to be versatile and flexible as we adjust to the coming months," Krimm said.

Krimm noted that the symphony is only planning about two months in advance as they work with Boulder County to understand the best way to re-open live performances. Krimm emphasized that safety is top of mind for them - for both the 75 musicians and their audience.

"One thing we've talked a lot about is how can we lead with keeping everyone safe and how can we be a part of bringing community back together after being isolated. We want to be at the beginning of opening and bringing art back to everybody," Krimm said.

Looking ahead to the fall, Boulder Symphony hopes to be able to put on two socially distant string orchestra concerts and is exploring the option of a parking lot concert where people could enjoy a concert while sitting in their cars - no programming has been finalized as the board waits to see how the remainder of the summer unfolds. In the meantime, Krimm pointed to the Boulder Symphony's virtual concerts as the best way to connect and support the symphony at present.

One positive side effect of the coronavirus closures, Krimm pointed out, is that organizations have been forced to step into the realm of technology with virtual offerings in a way that they might have been reluctant to do before.

Whether there is an opportunity to reach and engage a completely new audience even post-coronavirus remains to be seen, but Krimm is optimistic, "Virtual or online concerts create a way for more young people to be exposed to music. I've seen so much music from so many people that I've never heard of in the last few months."

Krimm has plenty to keep him busy in the meantime. He points to his own goal of having all the musicians of the Boulder Symphony on the payroll. "As a musician myself, I believe all musicians in the orchestra need to be paid and everyone needs to be paid well. We have to find a way to make it work."

About five years ago, the whole symphony was entirely volunteer. At present, approximately half of their musicians are paid. Krimm wants to keep building on that. "Thanks to the work of Devin and the Board, now about half the orchestra is paid. And we have a goal, once COVID is over, to move toward getting all the musicians to be paid," he said.

Which could pose an interesting challenge for the new executive director. Krimm points out that the symphony's operating budget is normally 20% ticket sales and 25 to 30% grants, with the remainder coming from donations. With ticket sales non-existent for 2020, the organization is relying heavily on community donations and grants to fund its ongoing work.

Krimm says that his wife, who is also a violist, teases him that he "joined the dark side" by taking on an administrative role. But Krimm strongly believes he can lead change from any side of the organization and looks forward to guiding the Boulder Symphony through the challenges of 2020 and growing its programming in the future.

To support the Boulder Symphony and see their upcoming events, go to http://www.bouldersymphony.org.