Student-athlete of the Week: Julea Trank-Greene

Series: Student-Athlete of the Week | Story 33 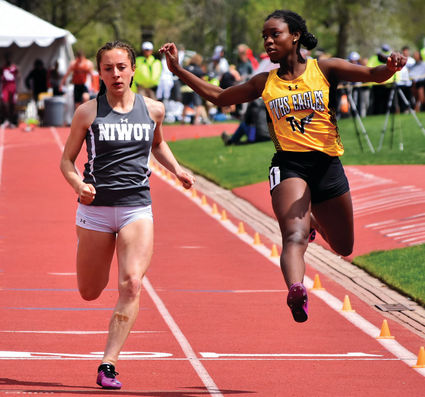 Niwot's Julea Trank-Greene helped lead the Cougars to the 2019 state title at the Class 4A state championships.

When Julea Trank-Greene came to Niwot as a freshman, she thought her path to high school athletic success would end on a volleyball court. But after just a few weeks of training with Coach Maurice Henriques and the Cougar track team in the spring of 2017, she permanently ditched spikes over the net for spikes on the track, and found a new path that brought her more success than she ever imagined.

"When I started, I had no intentions of doing track year-round, it was just for fun," she said. "Once spring sports started, I really did realize I could be a part of this amazing team, and I just fell in love with the sport even more and wanted to improve. But I never really thought I'd be one of the top varsity runners."

Trank-Greene was poised to be Niwot's top sprinter Before the COVID-19 pandemic canceled the 2020 season, a spot she's worked hard to earn ever since watching Mary Gillett's breakout season for the Cougars in 2017. Immediately after, Trank-Greene signed on with Henriques' Real Training running club and embarked on a grueling year-round workout regimen. She said she has kept Gillett's performance in mind ever since, and uses it as motivation during her workouts, "Other than being super-fast, Mary is the hardest worker I've ever met, so it just inspired me to work as hard as I could during every single practice."

As a result, Trank-Greene has seen consistent improvement in her times in the years since, and has become an integral piece of Henriques' relay strategy. During Niwot's title-winning weekend at the 2019 Class 4A championships, she qualified for her first ever 100m finals and finished eighth overall. She also ran on the second-place 4×100 and the first-place 4×200 relay teams, and was eager for a repeat before the COVID-19 pandemic canceled the season.

"I think we could have won the 4×200 again, and won the 4×100 this year," she said. "But I was also really excited to see how I was going to do in my open events because my coach was planning on putting me in the 400m more often, just so I could improve my 200m time. I really love the 200m-it's my favorite sprinting event, and I was really looking forward to running that this year, because I was definitely going to be able to break my PR."

Trank-Greene's stint with Niwot track and Real Training has improved more than her sprint times, however. It's also helped her develop a few once-hidden talents that will help her off the track.

"I'm outgoing with my friends, but it's hard for me to be a big leader," she said. "This year, I was the only senior girl leader helping the newbie sprinters, so I had to really step out of my comfort zone, and help the kids out more than I would. And since I was also a warm-up leader this year, it gave me a good chance to teach them and be friendly. There were a couple of freshmen I got close to during indoor, and I was really excited to race with them this year."

Fostering those strong bonds between the veterans and newcomers is one of the key tenets of Henriques' coaching philosophy, and one Trank-Greene subscribes to wholeheartedly.

"When I was on the volleyball team as a freshman, it was completely different," she said. "When I joined the track team, it felt nice to have people with the same goals. As leader on the team, it's really important that I reach out to the newer kids. Once they're close to people on the team, it just becomes so much more fun. Practice is the best time of your day, even when we're doing really hard workouts."

Trank-Greene will be taking those nascent leadership talents to CU-Boulder next year, where she plans to major in business and finance, a choice inspired by her experience planning and executing a successful fundraising project to fulfill her service requirement for Niwot's IB diploma programme. She hasn't settled on a specific career path just yet, though the title of CEO appeals to her.

"I think what I really learned from my CAS project is that I can actually make a big difference in my community," she said. Earlier this year, Julea and her twin sister Maedee raised more than $500 to help fight homelessness. "Something that held me back in the past was that I felt like I was just one individual and that everything I would do had a small impact, and I think that it made me feel more confident in starting other projects, because I really care about helping my community, and I would like to continue doing stuff like that in college."

She would also like to continue running in college, but her recruitment hopes were another indirect casualty of the pandemic. As of now, she does plan to try out for CUs varsity track and field squad, but knows it might be a long shot.

"I'm excited to try out," she said. Her senior teammates Joelle McDonald and Milo Ostwald will also be vying for a spot. "I was planning on trying to get a walk-on slot, but because I didn't get a season, I really couldn't hit those times. Earlier this year, I was really stressing about being recruited, but I realized it might not be the right decision for me, and I might just want to focus on my academics a little bit more."