Series: Student-Athlete of the Week | Story 32 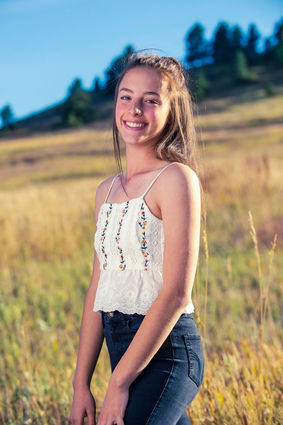 Pringles® may not represent the Platonic ideal of a potato chip, but its stackable shape makes for a fascinating computational challenge, according to Niwot senior Maedee Trank-Greene. The self-described "total math nerd" investigated the hyperbolic paraboloid structure of the famous "potato snack" for her senior-level IB math class, and called it one of the highlights of her four years at Niwot.

"I loved writing my math IA, which is not usually what people say," Trank-Greene said, referring to an "internal assessment," or self-directed project. "I love investigating something I didn't really know much about or how to do."

That love of learning has served Trank-Greene well during her time in Niwot's rigorous IB diploma programme, but has also led to its share of stress. When things get tough in the classroom, the busy student often turns to her other passion and takes out her academic frustrations on the court.

"Tennis and all the exercise and activity definitely helps relieve stress," she said. "That's why I love playing sports so much, because it lets me have my mind on something else, rather than how many assignments I have or how many tests I have. I'm just playing tennis and that's what my focus is."

Trank-Greene picked up her first racquet as a kindergartner, and has loved to play ever since. She has been a formidable presence in Niwot's doubles lineup for three seasons, which she attributes to a strong backhand and good taste in partners. She even has hardware to prove it, but earning that hardware meant dealing with some disappointment first.

"After my freshman year, we were a good enough team to win state, but we all pretty much choked at the beginning," she said. She and her partner were bounced after the first round in 4 Doubles. "We were really ready to come back that next year and use our anger to win the championship."

A risky strategy, but it paid off for The Cougars, who stormed to an undefeated season, and then stormed their way to the top of the Class 4A podium with a dramatic win over nine-time defending champion Cheyenne Mountain. Trank-Greene and her partner also took home the trophy in 3 Doubles without dropping a single set.

"It was a really great feeling," she said. "I remember the moment when we all realized that no one else could beat the amount of points we had. It's such an amazing feeling to put a bunch of work in, and get the outcome that you wanted."

The feeling was somewhat less amazing the next year, when Niwot was edged out of first place in the team standings, even as Trank-Greene repeated as individual champion, this time at 2 Doubles

"I was really really happy for myself and the other lines that won as well," she said. "Unfortunately, a lot of people were sad when we didn't win as a team. So I just let everyone feel their emotions, because I didn't want to make anyone upset."

Whether that disappointment could have led to another Niwot tennis championship in 2020 will remain forever unknown, as will the ultimate disposition of Trank-Greene's quest for a third state title. What is known is that she no longer has to worry about a potential conflict between state tennis and IB testing, a Pyrrhic victory at best.

"It was pretty frustrating and difficult to deal with at the beginning of the season, because I wasn't really sure if I'd be able to play. Unfortunately, both got cancelled. I'm not too sad about my tests, but it didn't really work out."

When she's not on the court or in the classroom at Niwot, Trank-Greene enjoys spending time with identical twin sister Julea, a sprinter on the track team. Though the two share a lot of interests, that wasn't the case when it came to their sports of choice.

"Julea used to play tennis as well, but she didn't like it, so she stopped playing," Trank-Greene said. "And I did track in middle school, but I wasn't as fast as her. When you're a twin, people constantly compare you to each other. It's really nice to have separate sports, where no one is concerned about who is better than the other."

Trank-Greene is now looking ahead to life after high school. She plans to enter CU's College of Engineering in the fall, and avail herself of as many math classes as possible. She also hopes to make tennis a regular part of her life, whether on CU's club or intramural teams. Until then, she will content herself with memories of a high school career that may have been bookkended by disappointment, but was filled with a lot of triumph along the way.

"It was really fun being a part of Niwot tennis," she said. "I've had a really strong team my four years of high school, and it's just such a fun energy with everyone. It's just a fun competitive environment."