The District Attorney's office makes an effort to monitor for reports about media scams. With the CARES Act being passed, the DA's office encourages all Boulder County citizens to look out for suspicion information about the stimulus checks set to come out.

In an increasingly digital age, when it's easier than ever to connect with millions of people, it has also become easier to take advantage of others. Gone are the days of snake-oil salesmen; instead, the public must be on the lookout for digital imposters everywhere.

"We always hear about an uptick in scams when there is any government activity affecting the public, and especially our older adult population – tax time every year, the new Medicare cards that came out in late 2018, the census, etc," said Boulder County Senior Deputy District Attorney Christian Gardner-Wood.

The most recent wave of scammers are taking advantage of the US government stimulus, the CARES Act. Simply put, this Act allows for individuals and families with certain incomes to expect a "recovery rebate" check from the government. The timing of the checks is still to be determined, with government offices being told to make payment "as rapidly as possible."

As a result, many scammers pose as government officials, often IRS or Treasury Department employees. Not only do these imposters ask for personal information, but they sometimes claim that you have to "sign up" to receive stimulus money or they set up fake websites that claim to "speed up" stimulus money for a fee.

"We have received calls from community members reporting that they had received phone calls from people asking them to verify personal information," said Gardner-Wood.

He said that the District Attorney's office has informational flyers posted on the office's webpage and sent out a COVID scam flyer in March. Another flyer and press release relating more to the CARES Act scam was released last week. They are also in the process of developing short videos to warn people about the potential scams.

Scammers are calling, texting, emailing and using social media to spread disinformation about the stimulus, so the DA's Office is trying to spread as much information as possible. Some of their tips include: 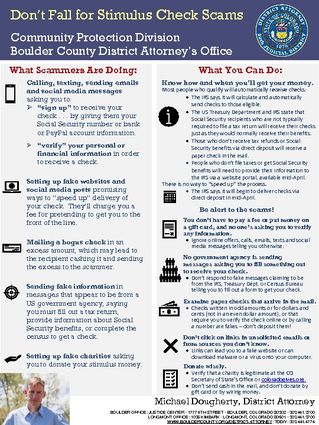 If you have questions or would like to report a scam, you can reach the DA's Community Protection Division at 303-441-3700 or daconsumer@bouldercounty.org.