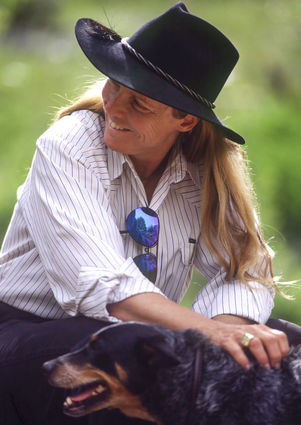 Hunter Lovins with her dog Tazzie

When Hygiene-area local Hunter Lovins took the stage on a recent snowy evening in Boulder, it was clear this wasn't her first rodeo. She is a gifted orator with a very strong message: climate change has doomed us.

But this message is delivered with a smile and a wink, and more than a few chuckles. Because she believes there are solutions to the climate crisis, and they are at our fingertips.

Like many of us, Lovins isn't from Colorado, but she got here as quick as she could.

"I am a Colorado cowgirl," said Lovins, in an interview before her Feb. 12 talk for the Boulder chapter of the Colorado Renewable Energy Society (CRES) at the Sustainability, Energy and Environment Community (SEEC) building on the University of Colorado Boulder campus.

Lovins first came to Colorado when she was 15, a brilliant teen who self-reportedly "didn't get on well with school" and whose parents were "looking for somewhere I wouldn't be a complete rebel."

When she arrived to attend Colorado Rocky Mountain School in Carbondale, she said, "I climbed off an airplane, looked around, and said 'I'm home.'"

Today, Lovins is a highly respected leader in the movement for sustainable development, and has spoken on stages large and small from Boulder to China to London and back.

She has collaborated for decades with a long list of notables, including Paul Hawken, David Brower, and former husband Amory Lovins, with whom she founded the Rocky Mountain Institute (RMI) in Basalt in 1982. RMI now has offices on three continents (including one in Boulder) and is rapidly expanding to its devoted task of transforming global energy use.

Hunter Lovins herself has been preaching about "natural capitalism" for over 20 years. The phrase is the namesake of the non-profit which she founded and runs from her ranch near Hygiene, Natural Capitalism Solutions.

"Natural capitalism" is not, as it may sound, meant to refer to a "natural" version of big "C" Capitalism. "It means the '-ism' of 'natural capital,'" according to Lovins.

She defined the concept of natural capital as "the services that are given to our economy by intact ecosystems. So things like a stable climate, pollinators."

Lovins doesn't have a problem with the misconstrued meaning, though, saying "I am a capitalist. Capitalism is our middle name. But I mean capitalism that properly values all forms of capital. And seeks to enhance and steward all forms of capital, so as to be able to create a greater wealth and wellbeing."

Within this framework, the imminent threat of climate change has been the heavy cloud hanging over her work for more than four decades. Her mission of valuing natural capital as a part of the economic system has been slow to be picked up by large corporations and governments.

But now, these ideas are starting to hit mainstream. She pointed out dozens of corporations that have dedicated paths to 100% renewable energy usage. Is it too late? She doesn't seem to think so.

Lovins' talk last week, titled "Exploring the Solar Dominance Hypothesis," laid out a rapid path for renewable energy to overtake our economy within this decade.

Her hypothesis is simple: solar plus storage will likely lead world energy production as early as 2030, because of economic factors largely already in motion.

"This is going to happen for fundamental economic reasons and you can't stop it," Lovins said, referencing the work of Tony Seba of Stanford, and others. "There's no technological or economic barriers to doing this, it's a question of social and political will."

So can we dramatically alter our energy systems and redefine our values fast enough?

Lovins said, "What matters to me most is honoring place and community," and this fundamental kernel gives a hint as to how she believes we need to move forward.