What's happening to our trees? 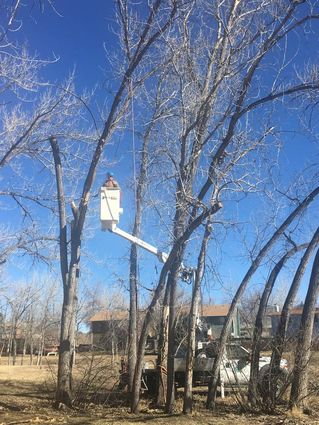 In a field dominated by men, two women make up Boulder County's entire urban forestry team--Cathy Thiltgen and Mary Tiernan. "We take a lot of pride in that," said Thiltgen.

If you have walked the Niwot trails lately, you've probably noticed these two women hard at work. As Thiltgen explained, their main objective is "looking at trees that may impact the trail or trail users and pruning any potential safety issues."

This mission is carried out in close collaboration with the county's wildlife staff. Since trees provide vital nesting habitat, Thiltgen and Tiernan avoid pruning during nesting season. "What we are doing on trail systems which we might not do in urban environments is leaving tree cavities in place, so long as the limbs won't fall," Thilgten added.

What the county does not do is create brush piles adjacent to the White Rock and Left Hand Ditches. These are created by the ditch company exercising its legal right to access the waterway. Often, the piles of brush are debris cleared from the ditches so water will flow unimpeded. They do provide good habitat, and the county does not move them unless they directly impede trail access (which they sometimes do).

Wood chips generated by tree pruning have several outlets. Some go to agricultural tenants for soil improvement, some are used as mulch for weed suppression, and some are used for mud control--especially last spring. In 2019, 63 tons of wood debris were diverted from the landfill. "We keep as much out of the landfill as possible," said Thiltgen.

Though trees on the trail systems are left mostly to their own devices, the trees at Left Hand Valley Grange Park are living experiments. One is a clone from the famous Hygiene Champion Cottonwood Tree, once named largest cottonwood tree in the nation. Others, including several species of oak, a Kentucky Coffee Tree, and two Golden Rain Trees, are experiments in drought-tolerance. And there are two American Elms that have been bred for Dutch Elm Disease resistance.

Unfortunately, our local ash trees have no such immunity. Thiltgen found Emerald Ash Borer thriving under the bark of an ash tree on the Hidden Star Trail. With the county's EAB budget, she and Tiernan have preemptively removed several large ash trees and planted other species to replace them. They encourage homeowners to start doing the same.

So far, Thiltgen and Tiernan have covered the Left Hand Valley Grange Park, Hidden Star Trail, the Niwot Loop Trail from Centrebridge back to Niwot Road, the Cougar Trail, and the Cottontail Trail. Next, they are heading to the Willows Trail system in Gunbarrel.

But Niwot is one of many trail systems these two women cover--in fact, they are responsible for the health, safety, and aesthetics of trees in all trail systems, trailheads, and urban parks on Boulder County's plains and foothills properties.

"We are trying to figure out how to get all these trail systems onto a rotational pruning schedule--to say we have looked at or provided some kind of tree risk assessment and make a determination." Thilgten's hope is to cover all the county parks and trails on a 5- to 7-year cycle, which is the industry standard.

But she also put out the call for help. "There are people out there who walk these trails every day, and I can't get out there every day and see things like they do. So if somebody sees something they think is an issue, they should contact Boulder County Parks and Open Space... Our best asset is the people who use these trails."

Upcoming projects for Thiltgen and Tiernan include replanting several trees at the Niwot Loop Trailhead to replace the chokecherries that died. Thiltgen also mentioned that the county is starting to brew its own compost tea to fertilize turf and trees.