Student-Athlete of the Week: Kyle Reeves

Series: Student-Athlete of the Week | Story 21 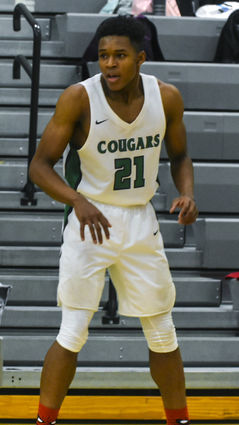 Senior guard Kyle Reeves is averaging 13 ppg and shooting 54% from the floor in his last three games for Niwot.

Kyle Reeves has been on the brink of a breakout game for Niwot all season, and when it finally came in the Cougars' 63-40 win over Northridge on January 7, the talented guard didn't hesitate to reveal the family secret behind his success.

"I was actually playing for my grandmother," the senior said of his 19-point, five-steal performance, both bests as a Cougar. "She's a big part of my life, and I dedicated the game to her. She's taught me so much, and she's just my everything."

Reeves has enjoyed a close relationship with grandmother since early childhood, which he spent growing up in Niwot, but it was another influential family tie that led Reeves to basketball, his other great passion in life.

"My dad played college ball, and I just wanted to keep my father's legacy going, and make it as far as I can," he said. "I tried baseball, soccer, and football, but basketball was really the one that stayed on top. It's in my blood."

That's evident in Reeves' intensity on the court, where he is turning heads as a senior guard for the Cougars, despite being plagued by inconsistency during the early weeks of the season. Over his last three games, he has averaged 13 points while shooting 54 percent from the floor (13-for-24) and 80% from the line (8-of-10). He has also provided a spark on defense, with 10 steals and 12 deflections.

First-year head coach Clay Wittrock said that the senior's "willingness to embrace the changes in offensive and defensive philosophy," is a key factor in Niwot's 7-4 record on the year, even if it had come at the expense of some personal success.

"He has had to make adjustments to his game to be more effective. This is something that can be hard for a player when they have developed a style of play. It is great to see how he has taken some early season struggles and is now using those lessons to be a more consistent contributor on both ends of the floor."

In addition to his father, Reeves counts NBA superstars Kyrie Irving and Russell Westbrook as his basketball role models, the latter for his "transition and athleticism," and the former for his hard work and positive mentality, two traits Reeves said he does his best to model on an off the court.

"It's always keeping positive, always inspiring others to do good things-aim to show that there are no shortcuts in hard work. You always have to work hard to get what you want, and always believe."

That positivity has helped him gain a reputation for kindness among his fellow students at Niwot High, a tribute the modest senior was reluctant to accept.

"I just do what I think is right, and I also try to put myself into another person's perspective-I always try to treat others the way I want to be treated."

Reeves is a member of Niwot's Link Crew and also participated in the Sources of Strength program. On Jan. 9, he was one of four current students to participate in a ribbon cutting ceremony to celebrate the school's recent renovations.

The senior hopes to continue his basketball career in college, but doesn't have any firm offers on the table as yet. He is currently debating between Otero Junior College in La Junta and Humboldt State in California, and is interested in studying botany and horticulture, another inspiration from his grandmother.

"I really want to focus on reforestation and faster ways to regrow plants more naturally... Throughout elementary and middle school, I would take care of as many plants as I could, some being at my grandparents' house, and some being at my house. One specific plant that played a big role in my life is the Venus flytrap."

Reeves also credited Niwot teacher Kane Hollins for fostering his future career ambitions, even if it was indirectly

"He knows how to teach, and he doesn't sugarcoat anything-if you have a question, he'll tell you the reality of it, and why it might happen. He actually speaks to you, not at you."

In the meantime, Reeves is looking forward to finishing his senior basketball season with the teammates that have meant so much to him over the years.

"The main seven seniors on varsity, we've all been playing ball together roughly on the same team since middle school," he said. "So we've had that bond from knowing each other for a long time. We feel more comfortable playing around each other, and that will help us out for the rest of the year."