Niwot heavyweight Jovani Lopez earned his fifth trip to the podium this season with a third-place finish in the 285-pound class at the Frederick Warrior Invitational on Jan. 11. Lopez was methodical in his final match against Wheat Ridge's Samuel Mondragon (12-7), steadily accumulating take down and nearfall points that would ultimately result in an 8-1 decision.

"My strategy was not to rush the moves, to just move around until I saw the opening," the senior said after the win, his 16th of the year. "He was a strong opponent, so I struggled a bit on moving him around."

Lopez went 3-1 on the day, his two other wins coming over Jesse Burt (2-2) of Strasburg by major decision (17-5) and Loveland's A.J. Anderson (4-5) by fall in the tournament's early rounds. His loss came in the semifinals, when he was pinned by Victory Martinez (12-5) of Greeley Central after a split second of indecision during an attempted escape. 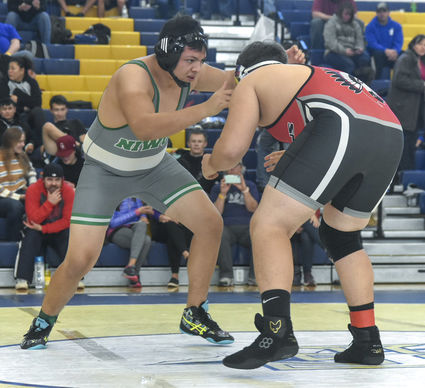 Niwot's Daniel Torres (220) had to forfeit his match in the consolation semifinals due to an injury to his elbow at the Frederick Warrior Invitational on Jan. 11.

Lopez's medal was the high point of an otherwise disappointing day for the Cougars, who were without varsity wrestlers Angel Aldama and Keith Hemenway due to illness. Niwot scored 32.0 points on the day, finishing in 17th place. Seniors Max Pecherzewski (9-7) and Bryan Martinez (5-9) picked up first round wins, but fell in the quarterfinals and were later knocked off in their consolation rounds.

There was also some bad news for the team when senior and state qualifier Daniel Torres (12-9) was forced to forfeit his consolation semi-final match due to an elbow injury. According to head coach Bobby Matthews, it is not yet clear how this will impact the remainder of his season.

Niwot will be back on the mat again Longmont on Jan. 16, then at the Alameda Invitational on Jan. 18.