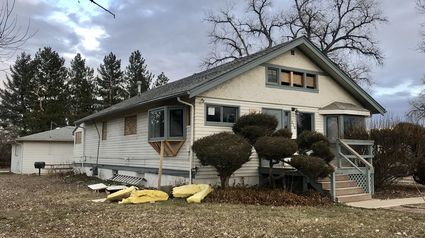 The former dental building at 376 2nd Ave. remodel to a residence is thus far the only change in buildings along Block 5 of downtown Niwot since a moratorium concluded nine months ago.

It's been nine months since the moratorium on development concluded for downtown Niwot and as yet, no new projects have been born, and new land use codes have not been put to the test. When the Boulder County Commissioners (BOCC) approved updated land use codes in April 2019, the nettlesome issue of access to the mostly unused alley between the residential side of the alley facing 3rd Avenue and the commercial area facing 2nd Avenue had yet to be laid to rest.

BOCC approved more prescriptive provisions for developments, and also gave the land use department marching orders to resolve the questions of alley usage and design. Additionally, members of the waning Niwot Design Review Committee needed to be appointed.

In September, following meetings the county arranged with residents and business owners regarding the alley on Block 5 of the Niwot Rural Community District, the land use department's recommendations were released, allowing commercial access, but requiring property owners along the alley between Franklin Street and Niwot Road to pay for improvements "upon submitting a development application" that would bring the alley up to the revamped design requirements. They must also "provide an acceptable location on their property for an appropriate area and easement to ensure adequate access and emergency turnaround from the alley."

The unoccupied former dental building at 376 2nd Ave. sits at the dead-end of the alley. In the summer of 2018, that property, which is owned by David Meisner, was under official review to become a mixed-use development, but plans fizzled out as a result of the 200+ day moratorium. Despite ongoing efforts to either lease or develop the property, the building is now being converted to a residence and, because of the scope of the remodel, no alley improvements are required.

"Due to the circumstances that unfolded through the years of trying to develop my land into a beautiful gateway for Niwot," Meisner said, "I decided my best option currently is to build myself a home then to see what the future brings. Hopefully one day we can all work together to utilize my land to the benefit of all the Niwotians."

A mixed-use project that local business owner Anne Postle proposed straddling Southpaw Commons at 240 2nd Ave. and the rear of Osmosis Art and Architecture at 290 2nd Ave. has been put on hold.

"The alley is the big concern for me," Postle said. "The alley solution that was proposed is cost prohibitive. For me the biggest issue is that the county is requiring that I dedicate easements for turnarounds on my property to them. I'm frankly not willing to dedicate part of my property to Boulder County when nobody on the historic district has to dedicate their property."

Because there have been no other improvements along the alley to date, under the new recommendations, Postle would be required to upgrade beginning at the entry of the alley for a total of 300 linear feet to make changes to her property.

The former Colterra Restaurant property, 210 Franklin St., at the start of the alley, remains unoccupied, with a for lease sign on the historic Bader House. In an earlier interview, Terry Palmos, the representative of the new ownership, Palmos Development, said the hope was to find a restaurant tenant for the Bader House. Palmos said, barring an eating establishment securing a lease, the building would be suitable for an office or retail tenants. Additional plans were to tear down the larger fire-damaged restaurant and construct residences in its place. To date, no permits have been issued for development.

Porchfront Homes' project to add on to its building at 102 2nd Ave. was in the planning stage prior to the moratorium, but is now "on indefinite hold," owner Mary Coonce said. Following the code changes, plans for the mixed-use addition would be deemed "no longer acceptable" by the county, according to Coonce, because of new setback requirements.

NBA president Tony Santelli's present assessment of downtown is, "There were six projects in play, the moratorium got triggered – five of the six are on hold indefinitely. The sixth is the Colterra property, and it's presently being developed without a restaurant in the plan...at a place where we've had probably a 20-year run of first-class restaurants. Number two, access to the alley has become so cost prohibitive that there will not be any access to the alley, contrary to what we all thought had happened as a consequence of the new recommendations."

As part of the update to downtown development requirements, Boulder County put out a call for Niwot Design Review Committee candidates, a review panel that had been called on with sporadic and decreasing frequency as new downtown building projects dwindled. The committee is made up of five individuals, according to the county's website, "and the selection process will be completed with the intent to include representatives of the Niwot Business Association, the Niwot Community Association, the Niwot Historical Society, at least one member of the HPAB, and members of the community who have lived or worked in the community for more than five years."

Both the NBA and the NCA put forward nominations for representative members, but neither of those representatives were selected for the respective organizations. Candidates participated in a group interview with the Boulder County Commissioners and each advised the commissioners which organization they would be representing.

The selected appointees received notice of their assignments in December, although a public announcement has yet to be made. The committee is comprised of Satir DeMarco (NBA), Will Hentschel (NCA), Katherine Koehler (NHS), Jason Emery (HPAB), and Bruce Larsen (community member). The committee serves on an as-needed basis to review proposed developments to preserve the historic character of downtown Niwot and make recommendations regarding proposed projects, but it has no enforcement authority. Members serve a three-year term.

NCA president David Limbach requested and received a list of the committee members from Boulder County Principal Planner Denise Grimm on Jan. 6 via email. None of the appointees, aside from Emery, who has been on the NDRC for several years (and the county requested that he continue to serve on behalf of the HPAB), were assigned to the organization for which they had intended to represent, including the NCA nominee who was assigned to be the community representative.

Following word of the appointments, Santelli sent an email to Boulder County Land Use Director Dale Case and copied the BOCC inquiring why the resulting appointees were not the individuals each organization had requested.

Santelli later said in an interview, "If that's the case, then the NBA has no voice in the NDRC, and I found that surprising to be honest. I accept it...they decide the rules of the game, but I was hoping to be able to go back with another representative and have a mutually acceptable person."

Case's email response to Santelli read, "The NDRC representation is an aspirational goal, and while the BOCC seriously considers the recommendations it receives for board applicants, it is not required to follow these recommendations."

Anne Postle was nominated by the NBA to be its NDRC representative, but was not selected by BOCC. Postle actively participated throughout the moratorium process advocating that the BOCC not adopt restrictive code provisions for downtown developments.

On this matter, Case wrote to Santelli, "...[T]he recommendation of the NBA was appreciated and considered, but was just one factor in the BOCC decision-making process. And as you may remember, during the NDRC appointment hearing the BOCC expressed their concerns regarding potential conflicts of interest with Anne's application, and thus made the appointment with those concerns in mind."

Following the NDRC selection process, Postle resigned as the NBA Local Improvement District (LID) representative and stated in a letter to BOCC dated Dec. 31, "I can certainly understand the reasons why the Commissioners and Land Use Staff would choose to reject me as the representative of the NBA on the NDRC...Your appointment of a 3rd Avenue resident who has fought both alley access for the commercial properties who share her alley, and new development on the 5th block, for decades, to be the representative of the NBA sends the message that conflicts of interest don't matter."

The NBA will nominate a new member to represent the organization on the LID board following NBA annual elections in February.

It was originally construed by Santelli ,and others involved, that the process of selecting NDRC members was similar to LID procedures where each group specifies their representative, and if that individual was not approved, another may be submitted. However, the process went forward without that occurring.

Neither Dale Case nor Denise Grimm responded to the Courier's requests for additional information.

Citing the moratorium as a "blow" to development, Postle said, "There's a caution that we have to work really, really hard to turn around, so a lot of people are trying to do that. I believe that

Niwot still has so much potential and that we should have a vibrant, thriving commercial district, and we will get there. "