Student-Athlete of the Week: Keith Hemenway

Series: Student-Athlete of the Week | Story 20 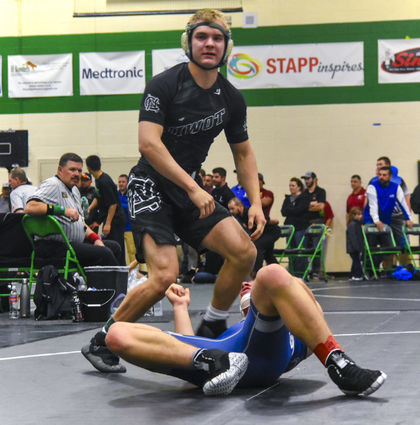 Senior Keith Hemenway improved to 11-6 on the season after winning four straight matches and taking 5th place at the Gary Daum Classic on Jan. 4.

Keith Hemenway got a jump start on his New Year's resolution to finish his senior wrestling season strong with a trip to the podium in front of the home crowd at the eighth annual Gary Daum Classic on Jan. 4. The fourth-year wrestler won four straight matches to take fifth overall in the 160-pound class and improved to 11-6 on the season, a career best. Afterwards, he chalked up his growing success as a senior to the three grueling years as an underclassman when success was hard to come by.

"As a freshman, I barely won any matches, so it's mostly being a senior and getting the hang of it," he said. "Wrestling just takes experience, and it takes time to learn what to do in every situation. I'm also more confident. As you get older, you become more confident because you think no one's really better than you since you're in the same grade or older."

For Niwot head coach Bobby Matthews, seeing the soft-spoken Hemenway blossom into a state contender has been worth the wait. He agreed with the middleweight's assessment of his growing confidence, and said it's easy to see on the mat so far this season.

"He has very good shots, and we've told him that for a few years now, but this year it seems like he's believing it. When he gets that first take-down in a match, it's very likely he's going to win it. He also hasn't given up any near-fall points-he hasn't gone to his back the whole year. We've been preaching that since freshman year-if you don't go to your back, you can't get pinned, and he's taken that to heart. He's going to be tough to beat at regionals."

It's also been a successful senior year for Hemenway off the mat. Last fall, he was named the October Student of the Month by the Rotary Club of Niwot, and he achieved the esteemed Eagle Scout rank for his long years of service with Niwot Boy Scout Troop 161. To attain the BSA's highest ranking, Hemenway earned more than two dozen merit badges and completed a community service project to improve Niwot's softball dugout.

In the classroom, Hemenway is enrolled in a mix of AP and IB classes, and has especially enjoyed AP computer science and AP economics, thanks to Mrs. Ewing and Mr. Benson. His current favorite is IB physics.

"It's really interesting, and it's the class where I feel I learn the most about what I'll be doing in the future," he said.

Hemenway's current plans for the future are not firm yet, but he hopes to attend CU, earn an aerospace engineering degree, and eventually settle into a career in that field. He is also considering CSU and the Colorado School of Mines.