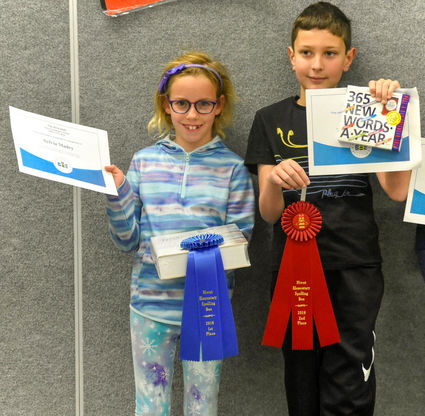 An unexpected "glitch" might have sealed the victory for third-grader Sylvia Madry at the 12th annual Niwot Elementary Spelling Bee on Dec. 5, but her hard-fought victory was definitely no mistake. Careful study of the Scripps spelling list, plus a few tried-and-true tricks helped propel the bespectacled eight-year-old through 34 challenging rounds against older and more experienced competitors.

"It wasn't the words that were hard, it was standing up and spelling them in front of all those people," Madry said after outlasting 10 other students to claim the 2019 NES spelling crown. For the win, Madry received a blue ribbon, a handsome certificate, and a copy of the American Heritage Dictionary. She will also represent the school in the Barnes & Noble Regional Spelling Bee in early 2020.

It's rare for a third-grader to win the NES spelling bee-Madry's was just the second-ever in the history of the contest-and rarer still for it to last more than 17 rounds. Over the course of the two-day competition, Madry spelled a total of 34 words correctly, including "Hyperion," "palladium," "McIntosh," and "minivan," which she said almost tripped her up in the fourth round.

To prepare for the bee, which is open to third, fourth and fifth-grade students, Madry said she practiced words from the Scripps list every day, and then worked with her mom, NES music teacher Abbey Madry, until she could spell all 450 of them.

Ironically, her winning word-the aforementioned "glitch"-was not one of the words on that list. By the end of round 32, the finalists had exhausted the words chosen for the oral competition, and had to move on to selections they hadn't studied ahead of time. For Madry, it was a chance to rely on the other spelling skills she had learned as a student in Mrs. Breyer's third-grade class.

"I knew it because I knew words like 'switch', and others. The way I'm good at spelling is that I sound out my syllables, and it's usually correct."

For Breyer, who has served on the NES spelling bee committee since its inception, the 2019 bee will be one to remember, especially for the fierce competition.

"We've sent three kids to the National Bee in D.C. out of the 12 years here, which is pretty amazing, but this year was a really competitive group," she said. "We've added an extra day before, but we've never had four spellers."

It was also the first time a current student from her classroom claimed the top prize.

"That was really exciting for all of us, for the third-grade to be represented like that," she said

Runner-up to Madry in this year's bee was Archie Walker, a former student of Breyer's. The soft-spoken fourth-grader was formidable, especially in the later rounds, when he confidently delivered the correct spellings for "proportionate," "Lascaux," and "jodhpurs." Unfortunately, he was ultimately tripped up by "scandal," a word from the supplemental list.

Joining Madry and Walker for the second day of competition were fifth-graders and returning finalists Shaan Karande and Hudson Bell, who finished third and fourth, respectively. Bell successfully spelled "haughty," "accelerates," and the obscure "tarry," before stumbling on "prestigious" in the 20th round. Karande was done in by "therapeutic" in the following round, but delivered "brayed," "vortices," and "Louisiana," in the earlier going.

Though both are "sadly" bidding goodbye to the NES bee, both are eager to take up the chase for the national finals in Washington D.C. again in middle school. Both said that they hope to "read a lot of Harry Potter" preparing for future competitions.