Soldiering on - The dragon, the phoenix, and the place in between 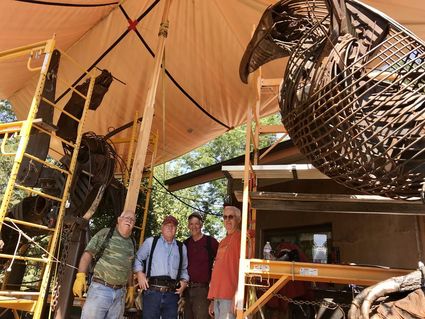 Denny Sedlack, Bob Lecy, Robert Bellows, and Dave Schares (L-R) stand under the dragon and the phoenix metal sculptures they're working on at the Warrior Storyfield.

Monday, Nov. 11, is a day set aside to honor those who have served in the United States Armed Forces - our veterans. According to the U.S. Department of Veterans Affairs, as of this year there are nearly 19 million living veterans. This is a story about a group of local veterans who are collaborating on an art project unlike any other.

Robert Bellows stashed away his sculpture making tools for decades while he operated a successful business. Retirement meant he could finally get back to the torch and metal manifestations he loved to create. What he manifested though was beyond his expectations.

Two acquaintances, both Iraq War soldiers, stopped by Bellows' studio just west of Niwot near Haystack Mountain as he was working on a 4,000 pound, eight-foot rooster, a commissioned piece for Boulder's Alfalfa's Market.. Bellows took the inquisitive men up on their offer to lend a hand that day...and then they came back day after day to keep helping.

Bellows, who hadn't served in the military, was oblivious to the impact it had had on the men, but he learned about it quickly.

Bellows gave them latitude with design decisions, which in turn invested them in the project. He saw that during the cutting and welding of recycled metal, the three of them had become a team. He witnessed the soldiers' demeanors softening, even in light of the distressing emotions they were carrying from having been in combat. The depression Bellows deals with allowed him to deeply empathize with how the creative process and metal working in particular can change those who suffer emotionally.

The trio was moved to tears when, after nine months of work, they rolled the finished giant rooster out of the workshop. It was then the vets turned to Bellows and said, "What do we get to do next?"

Bellows said that was not a question, but rather a welcome mandate. Bellows decided right then to devote himself completely to what evolved into the Warrior Storyfield (WSF), a nonprofit organization.

What they did next was to begin making a 16-foot dragon and an 18-foot phoenix, their eyes meeting. The sculptures are being simultaneously constructed because the beings are existentially connected. They're symbols of soldiers going off to war and returning home, and they represent veterans' stories, both brutal and beautiful.

Marine veteran, Ben Cardamone, who fought in the Vietnam War, joined the project five years ago.

"About eight years ago, my wife told me I needed help," Cardamone said. "I went to the VA and started my journey actually just telling people that I was a Vietnam Vet – people who knew me for 30 or 40 years and never knew it. It's something a lot of us hide."

He has an uncanny ability to spot other vets and doesn't let an opportunity pass to fill them in on the powerful positive effects he's seen at WSF.

And it's no wonder because there's a strong sense of magic and sacredness just being at WSF. It's partially the startling massiveness of the creatures combined with their impassioned and graceful stances and it's something less tangible. It's intense and cathartic, powerful and peaceful, and it all comes together with the fire from a welding torch.

"That's important," Vietnam medic Denny Sedlack said. "The fire we experienced was destructive fire and this is a creative fire. We experienced extreme dehumanization and extreme disconnect and when we got home that was reinforced. A question could be, 'What's the vehicle that allows us to sit in the fire to re-experience connection?' If there's some way to quell the beast for a few moments, there's a chance to find what connects us and this is a vehicle for that."

Transformation happens to WSF participants. Taking a flat piece of inanimate steel and turning it into an emotional expression is transformative in itself. The vets' cordial banter often develops into a more serious conversation where everything else must stop and the team will give its full attention to the moment. That's when the transformation of connecting, building trust and bonding comes in and when isolation is warded off.

Vietnam medic Bob Lecy is the "Heart Guy" on the project. He said the decision to make a dragon heart was the result of deep conversations. It wasn't pretty making this heart in a wheelbarrow of sand, lining it with hydraulically pounded metal pellets, and then brazing it with brass. It's become a focal point and will remain visible, like a battle wound.

An open heart translates into letting feelings in and out which is something Lecy, like other vets, could not allow while in the throes of the horrors of war and then wasn't encouraged to share when he returned home.

"It became more and more clear, at least to me, that what we were doing really wasn't about the sculptures as much it was about what was moving in us, especially the emotions," Lecy said "because we wall off the heart and protect it so we don't deal with our emotions. We learn not to, that's part of the experience of going to war in order to survive it. The problem is we come back here and there's no on switch and we don't know what to do with those emotions."

Three days a week participants, none of whom were metal artists before the project, come together. Bellows spends 40 to 50 hours a week in the workshop and no longer does commission work. There are no requirements to participate; each person decides when to come and what they'd like to do.

Estimates are that 50 veterans from six wars have been involved, but not all who heal were in the military. Dave Schares' brother was killed in the Vietnam War and processing that loss put him in an unrelenting loop. He drove by the WSF several times not sure he belonged before he summoned the courage to stop in. He's been a welcomed member of the team since day one.

"I always wanted to have some idea what my brother went through," Schares said. "Being out here, it gives me a chance to have the conversation."

The project's ripple effects are incalculable. WSF participants speak in college classes and on podcasts about everything from war to suicide to the healing process. They're not trying to solve the problems Bellows said; they're helping to express the problems. 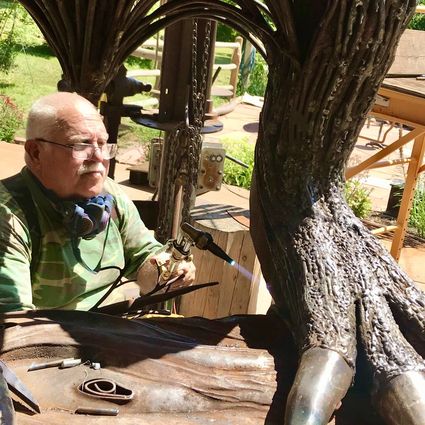 Warrior Storyfield participant, Denny Sedlack uses a torch to work on the foot of the phoenix metal sculpture.

WSF viewers, even with no connection to the military and no knowledge of battlefields, are struck with a sense of awe and often moved to reflect on their own wounds.

Everyone inquires about when the sculptures will be done and where they'll end up.

Bellows said, "We're in a mystery here. Our goal is that yes, we're going to finish these things but we're working in soul time and whatever time it takes, is what it takes."

"Our hope is that this whole project - the sculptures and the space in between - is where the people will come and that's where the changes will happen," Lecy said. "Are you going to continue to let the dragon hold you or are you going to take the risk and go with the phoenix?"

To learn more, to become involved, and to donate to help purchases resources such as safety equipment, visit http://www.WarriorStoryfield.org.